Valence provides a free and easy way to explore this exciting web and mobile technology.

Of all the interfaces used to interact with business data over the years, arguably nothing has evolved more rapidly than the technology behind what we see in today's desktop and mobile web browsers.

When you consider how commonplace highly intuitive features — like fields that auto-complete as you type, editable data grids, drop-down menus, collapsible trees, etc. — have become in the browser world, it's easy to forget there was once a time when the Internet was just a bunch of clunky, static HTML pages. The sluggish process of clicking on links and waiting for pages to draw themselves over and over again often served as a solid test of one's patience. It's no wonder then that businesses observing those early days of the "Web 1.0" evolution might have been reluctant to move their applications away from their tried-and-true client server or even 5250-based interfaces. The proposed browser-based replacements just weren't that impressive.

But how things have changed! When AJAX started becoming more mainstream around 2005—made popular by web pages sporting PC-like features such as Google Maps and Microsoft Outlook for Web—the interactive nature of the Internet changed big-time. And it's been year upon year of steady improvement ever since. Borrowing from a popular ad campaign of the '70s and '80s to address the evolution of the web: You've come a long way, baby!

The secret sauce behind today's slick "Web 2.0"-style web pages is HTML coupled with JavaScript, and over the past decade a number of handy frameworks and libraries have evolved to make it easier for developers to create apps that leverage this technology. JavaScript frameworks and libraries not only supplement HTML code, but in some cases they can be leveraged to generate nearly all the HTML code of a web page, abstracting developers from many of the intricacies and idiosyncrasies of HTML-based development. This is a big deal, and it has significantly transformed the way many web and mobile pages are developed on nearly every platform. Ergo, it has moved us from creating simple web pages to building fully functional web-based apps.

And the good news is that there are no technological hurdles preventing this development paradigm from applying to IBM i as well. That is to say, RPG developers can be part of this party too!

But if you're like most RPG developers, you probably spend the majority of your time focused on back-end business logic and supporting ongoing day-to-day business needs. This can make the prospect of jumping in to front-end browser development a bit tricky to undertake. Where to start?

That's why CNX released the free Community Developer version of Valence for IBM i back in 2009, with most of its source code included. This way RPG developers can install the software and quickly get their hands dirty working with practical, functioning examples in the exciting world of AJAX-based web and mobile development using Ext JS and Sencha Touch.

Perhaps the best way to quickly see what a JavaScript framework (in this case, Ext JS) can do on IBM i is to take a common green-screen concept—the ubiquitous subfile—and extend it to the browser. In the web world, the rough equivalent to a subfile is called a grid, and there are several example grid apps included with the Valence Framework to illustrate how they work.

So as a quick exercise, let's walk through the steps of taking one of these example grid apps and making it display data from your own, say, customer master. This process should take just a few minutes to complete.

First, if you haven't already, download the free Community Developer edition of Valence. This gets you a self-extracting file that, when launched, will ask you for some basic configuration info and then automatically unpack itself onto your IBM i. Note that some email systems strip the ".exe" suffix from the downloaded installation file, so you may need to rename it before you launch it.

Once Valence is installed, log in by going to the URL link and using the default user and password (VVADMIN). This will get you logged into your IBM i via the Valence Portal. Click on the Navigation button in the upper left to navigate to the Examples folder. Open up Grids and launch the Page by SQL (method 2) app. This is the app we're going to doctor up to run over your own IBM i data. 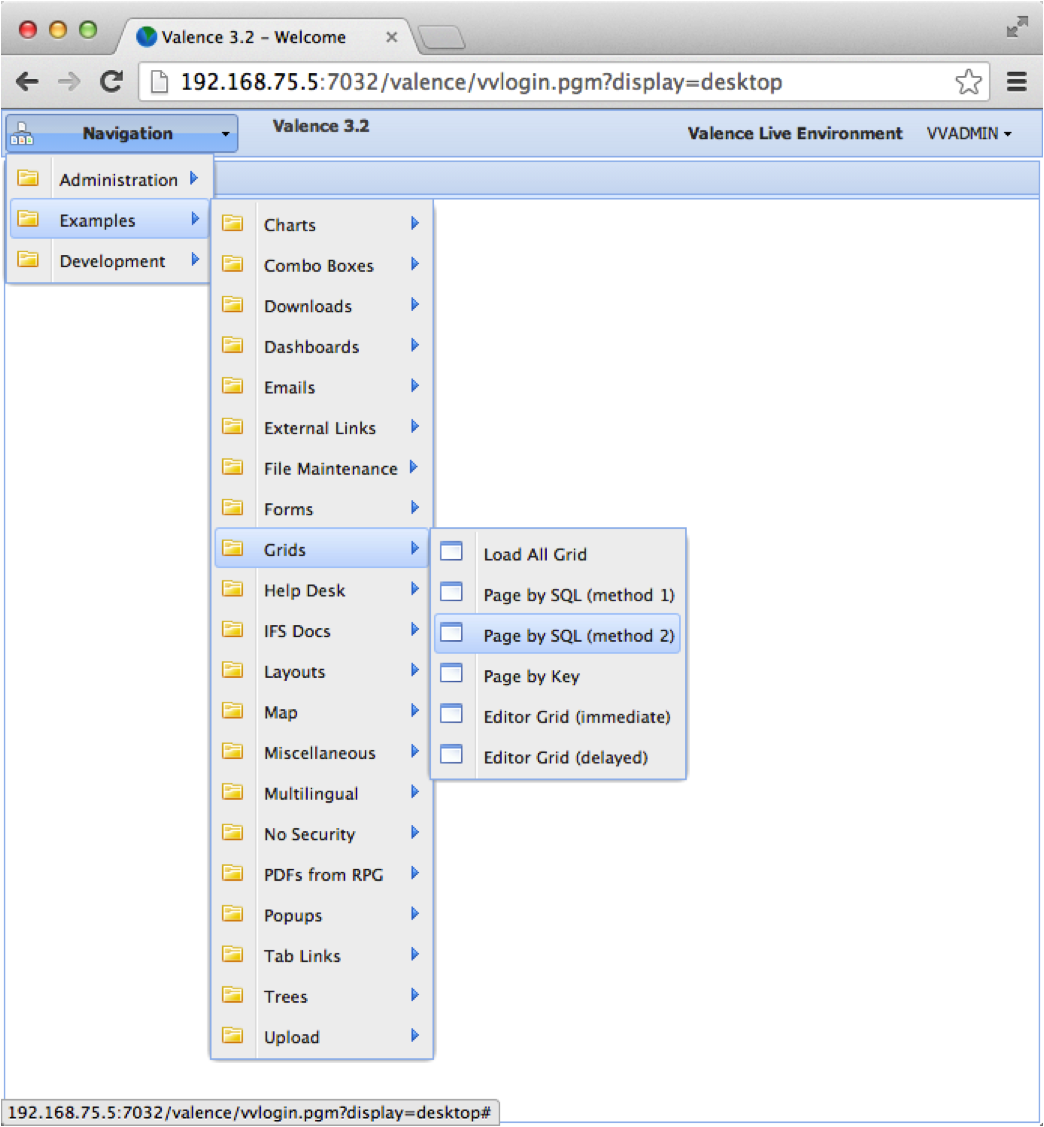 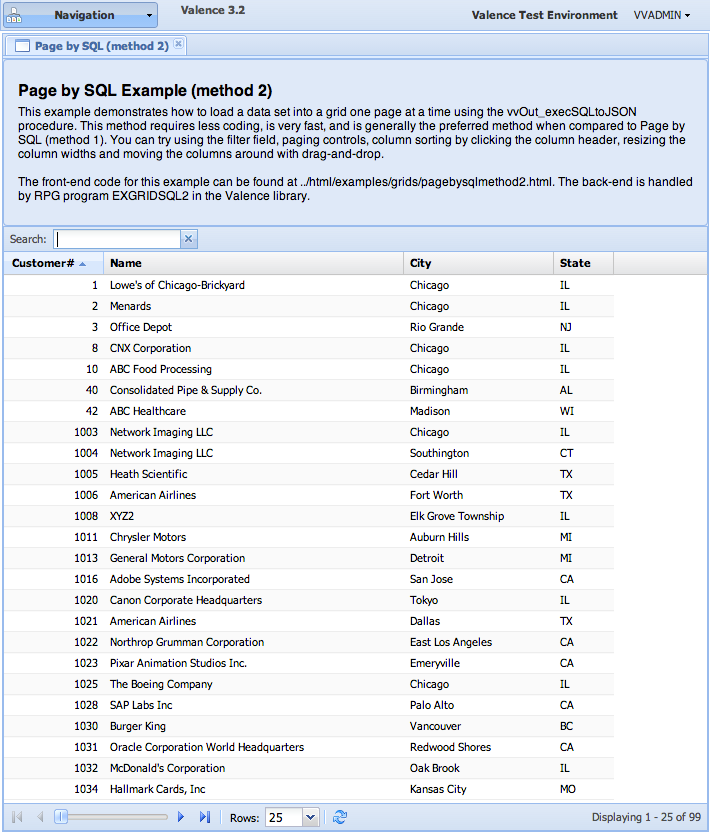 Figure 2: This example grid app will be displaying your customer data.

Switching this app to show data from your own customer master file will entail two simple steps:

So let's get started on step 1. Using your favorite source editor, open up the RPG source for member EXGRIDSQL2, located in file QRPGLESRC, library VALENCE32. Scroll down to the SendCustRecs procedure, where you'll find the following: 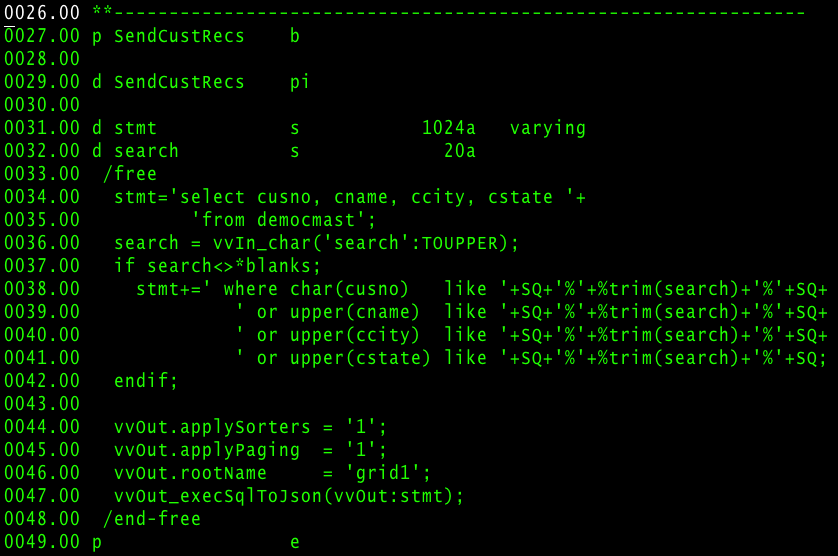 Figure 3: RPG code for the server-side logic is provided.

Let's break down what the RPG program is doing and what we want to change here:

Save your changes and compile the program (be sure VALENCE32 is in your library list). Then you're ready to adjust the corresponding front-end code.

For step 2, we'll edit the JavaScript source that controls the Ext JS grid of our example app. This source is located on your IBM i's IFS in path /valence-3.2/html/examples/grids/pagebysqlmethod2.html. You can edit this source using any editor or even something as simple as Notepad. Alternatively, since you're in the Valence Portal anyway, you may find it easiest to make these edits through the Portal's built-in source editor, which you can access by clicking on Navigation and launching the Nitro Source Editor app located in the Development folder. Once launched, scroll down to the IFS path in the tree panel on the left and double-click on the file to open it for editing. 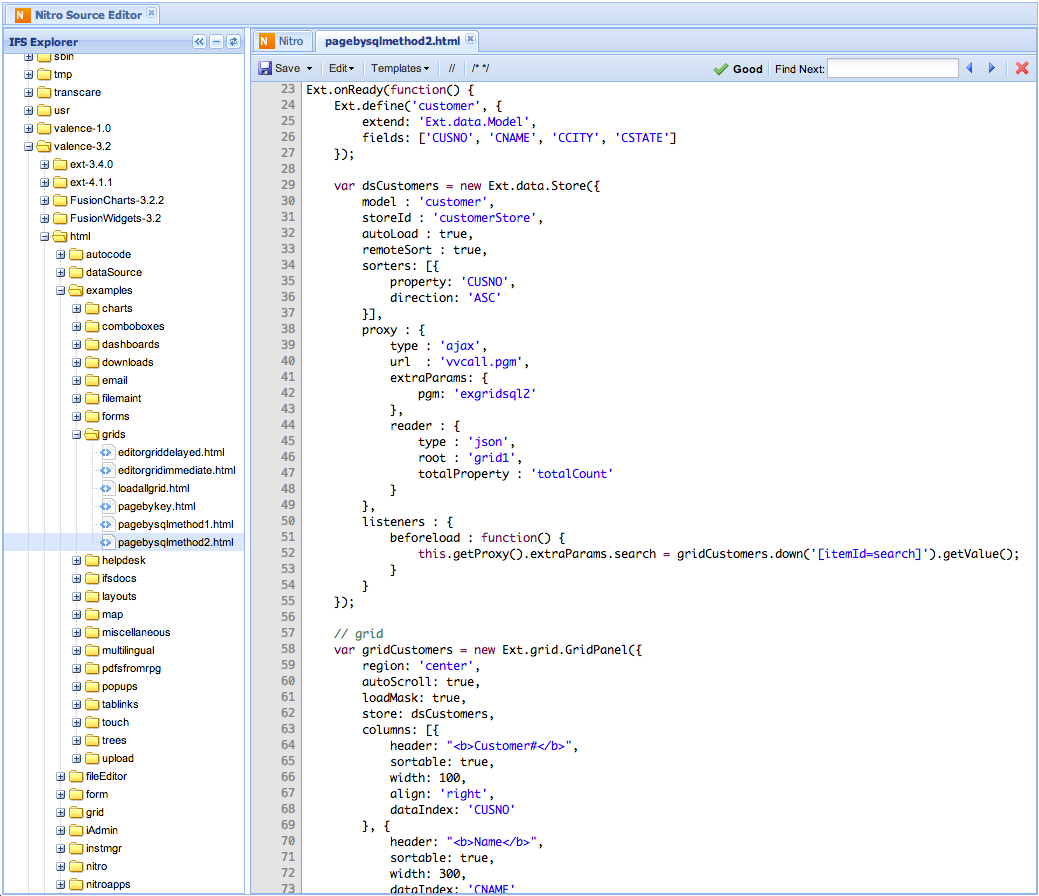 As an RPG developer, this front-end code may look a bit foreign at first. But it's not necessary to understand every element right away, as you can take time to do that later. For now, we're only concerned with telling the front-end which fields to expect from your revised RPG program. The simple changes to be made are as follows (be careful not to lose any of the opening and closing brackets; in JavaScript, they're important!):

With those changes made, click the "save" button and then close and relaunch the app. You should now see your own familiar customer data, loaded into an Ext JS grid and displaying one page at a time.

And with that, you've officially dipped your toe into the exciting world of JavaScript Framework-based development on IBM i!

Robert Swanson has worked as a developer on IBM i (and its predecessors of various names) since 1992, with an early emphasis on extending legacy ERP functionality beyond traditional office settings and into shop floor environments, where computer terminals tended to be less conventional.

With a background in industrial engineering, Rob spent many years championing the concept of weaning manufacturing and distribution operations from "off-line" reports and spreadsheets to real-time IBM i-based applications that enabled plant workers to interact electronically with office personnel. As the web world evolved and matured, the medium of choice has gradually switched from green-screen programs to browser-based applications.

Now a Senior Partner at CNX Corporation in Chicago, Rob works as an advocate for introducing Web 2.0-style desktop and mobile apps to IBM i shops, not only to increase user productivity but to bolster the image of IBM i as a world-class application server. CNX is behind the Valence Web Framework for IBM i, available for free download to the IBM i community as a tool for RPG programmers to interface their programs with Ext JS and Sencha Touch-based front ends.