Giving users data in a modern, usable format helps them work more efficiently, and SEQUEL makes this happen without even leaving IBM i.

IBM i costs 45 percent less than running Linux servers and 54 percent less than Windows servers, according to a 2014 study by ITG. These calculations are based on the average cost of hardware, licenses, support, personnel, and facilities over a three-year period.

While the DB2 database on IBM i is proven to be the most cost-effective platform, some companies are still moving to or adding others. Ease of use is a major factor. Organizations need their members to work effectively, and seeing data in modern, straightforward formats improves productivity.

What these companies miss is that IBM i can do everything client databases can do—when you implement the right tools. Helping business users visualize the data they need involves three main considerations: access, usability, and understanding.

For business users, believing data is easy to access is critical. SEQUEL's desktop shortcut is a simple way to get users to the data entry point.

Runtime prompts help users select the data they want to see right now. Later, they can select a different subset of information. SEQUEL provides access to vital real-time data, as well as warehoused or archived data.

What business users typically don't care about is where data is located. Data from other sources, like MS SQL Server, Oracle, MySQL, or other DB2, needs to be accessible in the same way. And if that data needs to be combined with IBM i data, there must be a way to do that. SEQUEL's power and flexibility provides results with one click.

Another requirement is getting data into the hands of business users fast. IBM i has a powerful SQL Query Engine (SQE) that allows data access requests to process quickly. SEQUEL requests can easily be directed to the SQE, so even large files return results quickly. 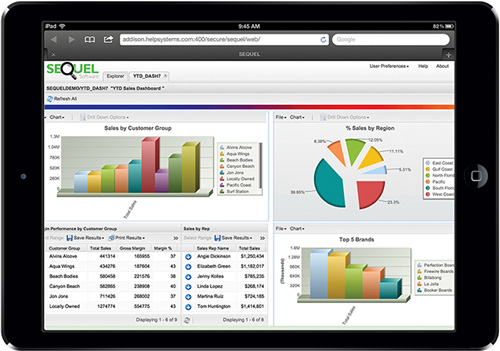 Browsers are the ultimate access solution (Figure 1). Nothing gets installed on user PCs, and IT departments have no software to maintain. To see current information, business users simply select an address from their "favorites" menu.

Dashboards are a simple and convenient way to visualize separate pieces of information in one location. This superstore of data can highlight different metrics that are important to the user. Choosing the right graph style can lead to new insights into the data. Gauges are a fast way to show a current value graphically. Buttons can take users to more and different data. SEQUEL lets you customize your dashboards to the needs of your business users.

When users are shown large amounts of detailed data, grasping the meaning generally comes easily. The meaning is not lost if data is presented in summary form. With SEQUEL dashboards, users can drill into summarized data to get more details, taking whatever path they choose.

For example, if conditional highlighting shows one division lagging behind in sales, an analyst can drill into the details to uncover where and why that division is behind. This dynamic drilling lets users determine the path each time they examine the results. 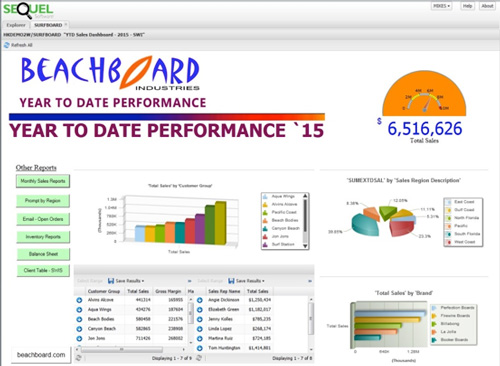 SEQUEL users can also export data to PC files, like Excel. Data displays—including dashboards—have a button for saving data to Excel, PDF, and RTF (Figure 2). Buttons on dashboards or shortcuts can be defined to automatically create PC files. SEQUEL jobs can also be scheduled to email or place PC files in a folder.

Surprisingly, many business users don't understand what their data is telling them. Often, this is caused by misinterpreting the data presented. When everyone starts with the same definition, you see fewer misunderstandings caused by casual users tweaking data so that it displays the way they feel it should. Activity like this can leave companies with islands of mismatched data.

When you build a dashboard or a results view or table just once with SEQUEL, it's available to be used from an IBM i command line, from a PC using SEQUEL GUI software called ViewPoint, and from a browser. Everyone uses the same reports, which helps reduce the disparate data within organizations.

SEQUEL gives users easy access to data presented in a way that's useful to any organization, and it frees your IT department to address more pressing issues, like security and complex reporting needs.

Find out how visualizing data with SEQUEL can help improve efficiency and insight. Call us at 800-328-1000 or email This email address is being protected from spambots. You need JavaScript enabled to view it. for your free 30-day trial.

Mike Stegeman is Sr. Data Access Consultant for SEQUEL Software, a Help/Systems company. He can be reached at 847-273-1047, or at mike.stegeman@helpsystems.com.