An IBM i open-source update as we approach the dog days of summer.

This spring has been a great one for open source on IBM i, but things especially took flight at COMMON's 2016 Annual Spring Conference in New Orleans. It was probably the best networking experience I've had at an IBM i event…ever. In short, community happened. A lot of it. This article's purpose is to excite and inform you about the things happening.

One of the pinnacles of the COMMON conference was the Open Source Roundtable held Tuesday night at the local Gordon Biersch bar. There were 43 people in attendance, including IBMers Steve Will, Tim Rowe, Tony Cairns, Kevin Adler, and Jesse Gorzinski. Last year, there were roughly 12. That's a big increase of interest. We went around the table to do introductions and tell a little about ourselves or our interests as it relates to open source on IBM i. We discussed a number of topics, including how to take things to the next level and have community interaction more than just once a year. Plans are in the works to have a regular web meeting for IBM i open source people to collaborate on whatever topics need discussion. A new Twitter hash tag of #IBMiOSS (IBM i Open Source Software) was also agreed upon as a means to convey news on Twitter. You're not on Twitter? You should be, because that's where things are being announced and it’s how you can stay informed. Thanks to Club-Seiden for sponsoring the first round of drinks and Zend for sponsoring the food and more drinks.

In the roundtable meeting, PHP expert Alan Seiden declared that open source is not only the sharing of code but also the sharing of ideas, and that's exactly what he did in one of the ReCon sessions. What's a ReCon session? Trevor Perry brought the idea to COMMON this year, and I'd describe it as a somewhat ad hoc presentation that takes place in a foot traffic area for all to partake of. Ours took place in a hallway with a portable battery-powered wall projector. All was going well until the hotel shut us down. I will admit it felt a little riveting and exciting to be shut down by the hotel "rozzers" (the term used by Liam Allan). Below is a picture of the small gathering with a variety of people tweeting about the event.

So who is Liam Allan? He's authored a new IBM i programming language named TOP that's written in RPG. Let me say that again to make sure I've conveyed the coolness. A young person has created something from scratch, an entirely new programming language, for the IBM i platform. Liam's effort won the COMMON Student Innovation Award. You can find the language's GitHub repo here: https://github.com/Club-Seiden/TOP. Below is his well-attended session at COMMON, where he dove into all of the features. It was very fun hearing him describe the history and the way features were thought through and implemented. 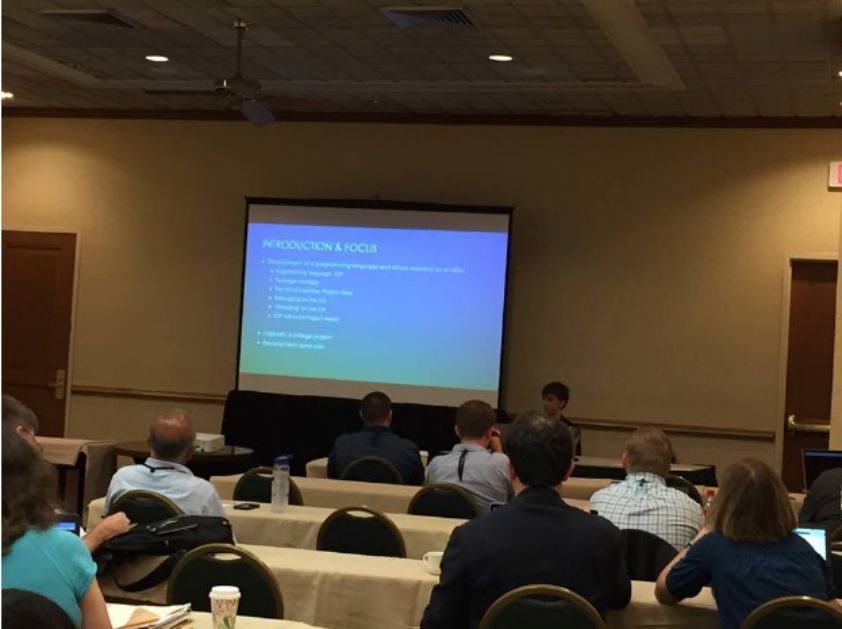 And check out this professionally created pic of Liam congratulating him on his award. This was made by IBM for IBM i and was one of many graphics created for marketing IBM i-specific things this spring. Not only that but a humorous YouTube video was also created, and make sure to watch to the end to see "Run modern workloads on IBM i."

Figure 3: IBM is advertising for IBM i

Hold on; I'm not done talking about Liam. You can find his GitHub page here, where you can see his activity on a variety of open-source projects. Another one of his projects that is gaining momentum is a package manager named RelicPackageManager. He has taken a number of existing projects, including my RPGMail from mowyourlawn.com, and made them work with his new package manager to ease installation and building of IBM i open-source projects.

Oh, you thought I was done listing Liam's open-source projects? Not quite. :-) He's also authored a green-screen file editor named FFEDIT. And for good measure, here's Liam's DB2GET repo that conveys how to use the DB2 for i web service capabilities to try things from the Internet. I love that this kid has energy and that he's getting to share it internationally. There are more young people out there in the IBM i community with ideas. Will you engage in the community?

What else is going on in the IBM i open-source community that you might not be aware of? Let's dive in with a bunch of short snippets of activity.

Club-Seiden has started an IBMiOSS_Public channel for instant chat using Gitter. Gitter is a good way to do instant collaboration (think Google Hangouts or IRC), and now the IBM i community is using it also.

LinkedIn has a new group started by Bill Gravelle named IBMiOSS. Bill has been contributing a lot of time to coordinate things relating to open source on IBM i.

David Gibbs (midrange.com owner/operator) has worked with Pete Helgren to put together a new mailing list named This email address is being protected from spambots. You need JavaScript enabled to view it.. You can sign up here.

Pete Helgren is also working with COMMON to continue their open-source focus by giving dedicated space at this URL: www.common.org/open-source. Not only that, but COMMON is putting on an open source conference this July in Chicago with a focus on Ruby, Node.js, Python, Git, IFS containers, and more.

Chris Hird is energized to continue his pursuit of open source on IBM i. You can catch his blog here, where he recently wrote about how to set up RDi with a GitHub connection to more easily share source code.

Trevor Perry authored a new requirement to have Linux be a next generation of, or another flavor of, PASE. Currently, PASE (where Node.js, PHP, Ruby, Python, Git, Java, MySQL, etc. run) is based on AIX. Linux gets a lot more attention than AIX, and it would make our adoption of open source on IBM i easier if we had a PASE based on Linux.

I had the opportunity to meet @PHPDave (David Dressler's Twitter handle) in person at COMMON. He's another young person to watch as he is consistently authoring content on his blog, and a lot of it has to do with open source. Dave jumps right in and contributes to open-source projects like IBM i Chroot. We need more Daves.

KrengelTech's Litmis Spaces won the runner up award at the 2016 COMMON Spring Conference opening session. Litmis Spaces allows developers to easily kick the tires of open source on an IBM i in the cloud with preconfigured, turn-key environments. For example, PHPDave has been using it to compile PHP7, from scratch. Others have been taking the Node.js and RubyOnRails tutorials offered as labs at many of the 2016 spring conferences and user group meetings including WMCPA, NEUGC, COMMON, OCEAN, and COMMON Europe Congress. Email This email address is being protected from spambots. You need JavaScript enabled to view it. to sign up for your free Space and gain free access to the Node.js and RubyOnRails labs.

Buck Calabro submitted instructions on how he contributed his SEUEXIT source code to GitHub. This is great because it gives those with a focus on RPG a good example of how to accomplish code sharing with Git.

Another new repository from Tony Cairns is his db2sock efforts on Bitbucket. The project's goal is a PASE DB2 CLI asynchronous API driver (libdb400.a) and was started because Node.js currently does all DB2 database operations synchronously. The cool thing about open source is the public collaboration that takes place so you can see the reasoning behind decisions.

While I was at the TEC Toronto User group's conference, I got to see firsthand the interest in Git-managed RPG source code as IBMer Edmund Reinhardt spoke to a full room of RPGers about the new Orion browser-based editor. Seems to be a lot of interest in this space. You can learn more in this MCPressOnline article.

And of course there's the continuously updated developerWorks page devoted to open source on IBM i. This is where IBM lets us know of their efforts and updates. You should sign up for a developerWorks profile if you don't already have one and then subscribe to get notifications of updates. IBM has a number of their April announcements still in "coming" status (Orion, Git, Python 2, and "Tools"). The one from April's announcement that is available is Node.js v4. This is an important update because it implements the latest syntax changes of JavaScript.

As of this point, I've only touched the surface of all the things happening in the IBM i open-source space. So many things are happening that even I was having trouble keeping up with things, and I do IBM i open source all day every day. It's for that reason I've created a new page where we can aggregate all the sites, repos, collaboration efforts, etc. that relate to open source on IBM i. You can find it here: http://bit.ly/ibmioss. This is a publicly editable wiki that anyone can add content to for the benefit of the community. As you can see, there's a good list of things happening, and you can always view the history to learn who added what and when. Oh, and you can subscribe to notifications so you know when new things are added!

At the end of the day, open source means community. It means IT professionals coming together and sharing information, ideas, and code. Will you participate?