The value of a user group is usually gauged by the collaboration within it's members. Let me tell you why COMMON does one better.

The first weekend of each December is when this brave columnist and his fellow Common Americas Advisory Council (CAAC) members brave the cold and travel to Rochester, Minnesota, to meet with IBM for two days of meetings where we represent the collective community of the COMMON Americas User Group. While I can't discuss in specific detail what we talk about, I will tell you that there is a tremendous amount of collaboration between the CAAC and IBM. This benefits independent software vendors (ISVs), IBM Business Partners, and most certainly Power Systems customers. The CAAC has a counterpart organization affiliated with COMMON Europe that gives IBM a perspective from the European Power Systems community as well.

So what does the CAAC do exactly? Well, it's a group of 13 or 14 COMMON volunteers who meet with key IBMers via conference call every two weeks and in person twice a year to discuss and give feedback on IBM's short- and long-term plans regarding IBM i, Power Systems, and related technologies like Linux and AIX. Some members you know quite well, and some maybe not too much. Some are consultants and IBM Business Partners. Some are ISVs. Some are customers who have really small systems and others who have bigger 32-core machines. It's a great cross-section of IT environments, business types, skill sets, and experience represented by everyone from programmers all the way up to CIOs. There's a wide variety of viewpoints and experience.

IBM Rochester is a special place, and not only as the birthplace of the AS/400. To be honest, it's awe inspiring to just be in the buildings for the historical aspect, but I digress. The meetings we have are roundtable setups with all the CAAC members and about five very key IBMers. What's really special about the meetings at IBM Rochester is that there are about 20 or so additional seats where designers and specialists for DB2, application development, security, high availability, hardware, backup and recovery, and anything else related to IBM i and Power Systems are there to both help understand and address our concerns, and to collaborate directly with community representatives.

The CAAC brings Power Systems community concerns to IBM and represents a collective voice for the community. For example, the CAAC will receive an "IBM should include <insert feature here> in the next release or as a PTF" request in the form of a "blue sheet" at COMMON or through simply talking to other community members.

Each community request is discussed, and if deemed worthy, it's turned into a valid "requirement." The CAAC then presents those requirements to IBM and works with them to see if it's something that IBM wants to work on, given cost of the effort involved and overall impact on the platform. Sometimes it's an easy solution with a high impact; sometimes it's a difficult effort with very low impact and/or payoff. The discussions are there to validate and prioritize the requirements. Every two weeks, the CAAC gets together for an hour-long conference call to work on requirements with our IBM liaison Dawn May.

As far as potential requirements go, I've personally been involved with heralding a couple through Twitter this past year. This one below in particular was pretty cool: 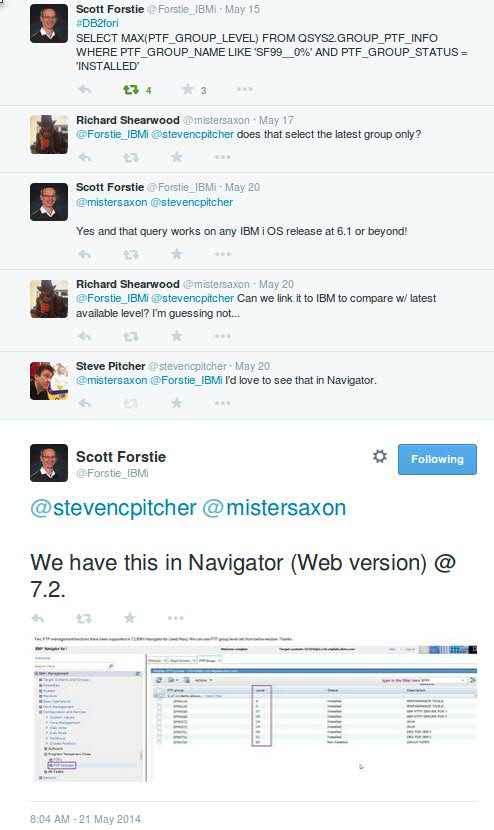 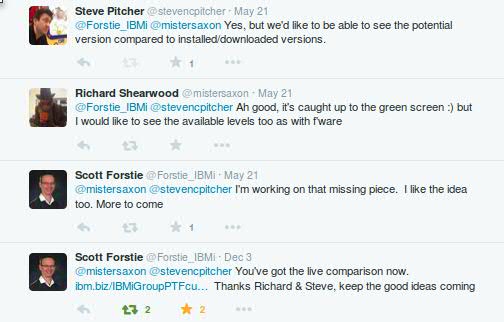 As you can see, this was a very simple discussion on Twitter about enhancing PTF management on IBM i with Scott Forstie, DB2 for i Business Architect & SQL Development Team Leader at IBM, and two IBM i customers: Richard Shearwood and yours truly. What you don't see behind the scenes is the private conversation I had with Richard, the requirement being logged in our CAAC database, the discussions between CAAC members and IBM, and the development work IBM did to make it happen as an actual, usable feature. It just didn't appear. And it's a cool feature! It's the ability to now know your Group PTF levels and compare them with the levels available to download! If you've got a custom IT dashboard for system status, then this is a valuable feature to see if you're out of date on your fixes.

In addition to the time the CAAC spends in Rochester, it also travels in the spring to the COMMON annual conference and expo about four days in advance to have another two solid days of work with key IBMers on behalf of the community. The spring meeting is very similar to the meetings in Rochester but with a few differences. First, we don't get access to the extra IBM resources in the room that we get in Rochester, and second, it's at the beginning of a major conference, which has its challenges, especially if a member is involved with COMMON as a volunteer in other capacities.

Some might think that it could be a home vs. away turf battle, but that couldn't be further from the truth. In reality, the work that the CAAC does with IBM is incredibly productive and rewarding. It's not an "us vs. them" situation at all. From my perspective, IBM is a very willing dance partner in helping evolve the technologies that benefit both the community and IBM. It's a win-win for all parties involved.

For the last few years, the amount of CAAC requirements that actually made it into IBM i 6.1, 7.1, and 7.2 by way of full OS release, Technology Refresh, or PTF is around 62%. That's an incredible amount in my humble opinion. And it keeps going on a very regular basis.

So why is this important to you?

Perhaps you didn't know you had an avenue to voice your Power Systems concerns directly to IBM? Or perhaps you weren't aware you had a group of advocates who work regularly with IBM on your behalf? Maybe you thought about a feature you wished was a part of IBM i but don't think IBM would do anything? If you think about it, there's a 62% chance they would if they knew about it. But it all depends on the degree of difficulty and the overall value to the operating system. But being silent doesn't help anybody. There's a great Wayne Gretzky quote: "You miss 100% of the shots you don't take."

What's so great about COMMON is that it gets valid community concerns to IBM to at the very least be discussed with the people who have the power to effect change. How many technology companies have that kind of accessibility by way of their user groups? Not many. The collaboration isn't just with the users. It's with the designers, product managers, and architects. COMMON offers user group collaboration that's powered by POWER.