Ted Holt explains how to use the trim, type-conversion, and case-conversion functions in your IBM i CL programs

Editor's note: This article is excerpted from chapter 4 of Complete CL: Sixth Edition.

This article explains some of the various manipulations you can perform in CL to combine two or more constant or variable values: specifically, the trim, type-conversion, and case-conversion functions.

Use the three trim functions to retrieve the values of CL character variables with one or more leading or trailing characters removed. These functions do not modify the variable to which they refer. They merely retrieve a value and return it to the invoking operation.

There are three functions in this group:

The trim functions accept two parameters. The first, which is required, is a CL variable from which data is to be copied. The second one contains one or more characters that are to be removed from the value. This parameter is optional and defaults to a blank character.

The example in Figure 1 fuses the %TRIMR function to build a qualified filename from separate file and library names. It removes trailing blanks from the value of the library name, concatenates a slash separator, and adds the simple filename.

Figure 1: The TRIM function, used to remove undesirable blanks from the last name

The case-conversion functions, %UPPER and %LOWER, return the value of a character value in either upper case or lower case. Like other functions, these functions do not modify the variable to which they refer, but return a value.

Figure 2: The UPPER function, which eliminates the need to test for lower case and mixed case

CL has a useful set of functions that convert data from one type to another.

%CHAR returns the character representation of any type of data. It accepts one argument: the value to be converted to character.

The code snippet in Figure 3 illustrates the use of %CHAR to convert a decimal number. This program calls program POST120, which applies some sort of batched updates to a database. POST120 returns the number of updates through packed decimal variable &UpdateCt (update counter). If no updates occurred, there is no need to continue, and control returns to the calling program. If at least one update was applied, this CL procedure uses the SNDPGMMSG (Send Program Message) command to write a message to the job log and continues with other processing.

Figure 3: The %CHAR function, which converts a decimal data for inclusion in message text

The job log contains a message similar to this one: "Number of updated rows: 105."

The %DEC function converts a value to packed-decimal format. It accepts three parameters - one required and two optional ones:

The default values of the second and third parameters depend on the data type of the first parameter.

If the first parameter is a character value, certain rules apply:

In the code in Figure 4, variable &inMaxPages is a parameter that has been passed to this procedure. The %DEC function converts the value of &inMaxPages to a five-digit packed decimal value and stores that value in the &MaxPages variable for use by another program.

Even though the CHGVAR command can convert character data to packed decimal, CHGVAR cannot convert a blank value to zero, nor does it permit trailing sign characters. For this reason, it is good to use the %DEC function when converting character values to packed decimal. That is, this:

The code in Figure 5 uses the %DEC function to convert decimal and character data to suitable formats for the SBMJOB (Submit Job) command. 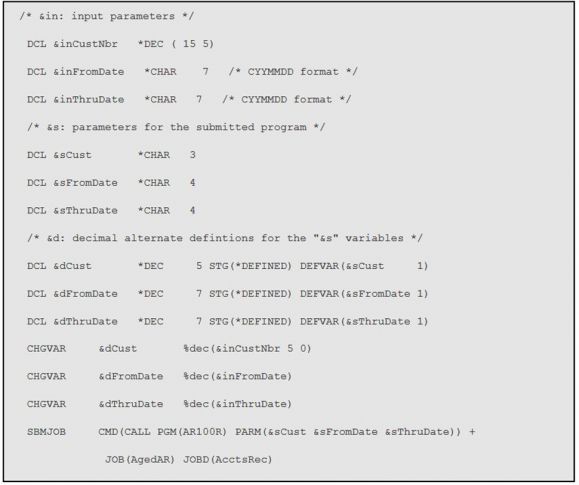 The SBMJOB command cannot pass decimal numbers in those formats, but you can "fool" the system by putting decimal values into character variables.

The variables that begin with &in are the parameters that this program receives from calling programs. Notice that they are defined differently from the way that AR100R requires them to be defined.

The %DEC function was not required in any of the three CHGVAR commands, but calling %DEC eliminated the need to check the &in variables for blank values.