Over the past several years, we have been bombarded by IBM and others with the virtue of Java as an object-oriented (OO) development language. Hundreds of books attempt to teach programmers the language, and most of the literature on Java focuses on the language, its syntax, and programming techniques. IBM Press offers two excellent programming books: Java for RPG Programmers, 2nd Edition and Java for S/390 and AS/400 COBOL Programmers.

But Java as a language brings very little to the table without first looking at OO design. The maximum return on an investment in Java and OO can be achieved at the enterprise level. While it is unrealistic to think that many shops will embark on a project to rewrite all their legacy applications and replace them with Java-based OO systems, it may be worth your while to spend some time and effort developing an OO design strategy and beginning to explore the gradual migration to OO-based systems.

To realize the benefits of OO design and Java, you need a comprehensive enterprise model and architecture that identifies your enterprise's business objects and the relationships that exist between these objects. You must then explore and understand the methods that exist within these objects to support your business operations. The process is a top-down methodology that uses functional decomposition to get to the details of system design. Once a business model is created, you will find that you can work on various parts and components of the model.

We have all heard a great deal about Model/View/Controller(MVC or Model-2). This design paradigm is a methodology to separate presentation and workflow (View is presentation; Controller is workflow). What has not been discussed in much detail is the "model" component of MVC. It is the model that is the very heart of your system. It is the collection of and the relationships between the key business objects and the business rules governing those objects that exist in your enterprise.

A model object can be a simple business object such as "Employee" or an extremely complex object such as an insurance company's "Policy." In a large multi-line insurance company that handles many different types of insurance, an insurance policy may be decomposed into literally hundreds of discrete business objects and even more objects when analyzed for implementation (you might create a PersonName object or an Address object to implement recurring technical manipulations of Name and Address). The key factor here is that the "Policy" is an object class and can be treated as an object with several major methods that apply to all policies. You always "Issue" policies, "Renew" them, "Cancel" them, etc.

From a processing standpoint, regardless of what type of user interface you require, you will always create new policies, modify existing polices, and retrieve one policy or a set of policies.

Using iSeries tools from the Java Toolkit (such as PCML or the new RPG/COBOL Java method calling facility), you can implement bidirectional interfaces to new business model objects.

In legacy systems, specific programs would be written to perform specific operations, and your "policy" would exist only in terms of its representation in your database. Each program would contain logic to handle specific business processes or rules. OO design encapsulates your business object--be it an insurance policy, your inventory, or a manufactured product--along with all the rules and operations pertaining to that object.

This means that once you identify, define, and implement a business object, you can write new workflows and interfaces to the object and gradually migrate legacy applications to use the new objects.

Two common methodologies have become popular. One is the Rational Unified Process (RUP) developed and advocated by Rational Software Corporation, founded by Grady Booch, Ivar Jacobson, and James Rumbaugh. The other is TogetherSoft, founded by Peter Coad.

Rational and TogetherSoft's methodologies focus on program design and modeling based on a UML construct called the "use case." A modified methodology is advocated and taught by Doug Rosenberg, president of ICONIX. Rosenberg advocates use case-based design, but he focuses more heavily on analyzing the entire enterprise, identifying business objects and their relationships. Rosenberg reintroduces a diagram that was discarded by Rational and TogetherSoft, the "robustness diagram," which maps objects to use cases.

Most commercial methodologies and the software sold to implement them are designed to generate large continuing revenue streams for the vendors and consultants advocating these methodologies. If you are new to Java, I strongly recommend that you use a good consultant to help you get started, but buyer beware. Many organizations attempt to capture an account by first selling the software, then training users, then providing ongoing consulting. Many of the methodologies are complex and can consume an organization by shifting focus to the methodology, tools, and design products, ultimately producing little actual result in terms of systems built for your enterprise.

Another issue to keep in mind while reviewing methodologies and tools is that much of the work in OO design comes from extremely technical disciplines in which OO design and programming has been used to control complex machines or build generic software. Most of the books on OO design use examples from industry, such as software to run a telecommunications switch, a robot, or a heating and cooling system. Another example might be a software product such as a CAD/CAM system.

If you want to design OO systems, you need to become familiar with UML. The beauty of UML is that it is an open standards-based language, which means it is not proprietary. The UML is controlled by a subgroup of the Object Management Group (a non-profit standards body) and may be found at www.uml.org. UML is a specific XML dialect capable of capturing sufficient detail to support several standardized diagrams as well as generating Java, C++, and other OO code.

The importance of UML as a language is that it was designed to be generated as a by-product of drawing diagrams or importing existing OO code (mainly Java and C++). You can import an existing Java application and view the diagrams generated from importing the code, or you can draw diagrams that can be exported to code.

In the UML, use case diagrams are used to capture and record business requirements. They are captured from the perspective of what a system component must do, not how it does it. The approaches taken by TogetherSoft, Rational, and other OO design consultants start with a collection of use case diagrams. 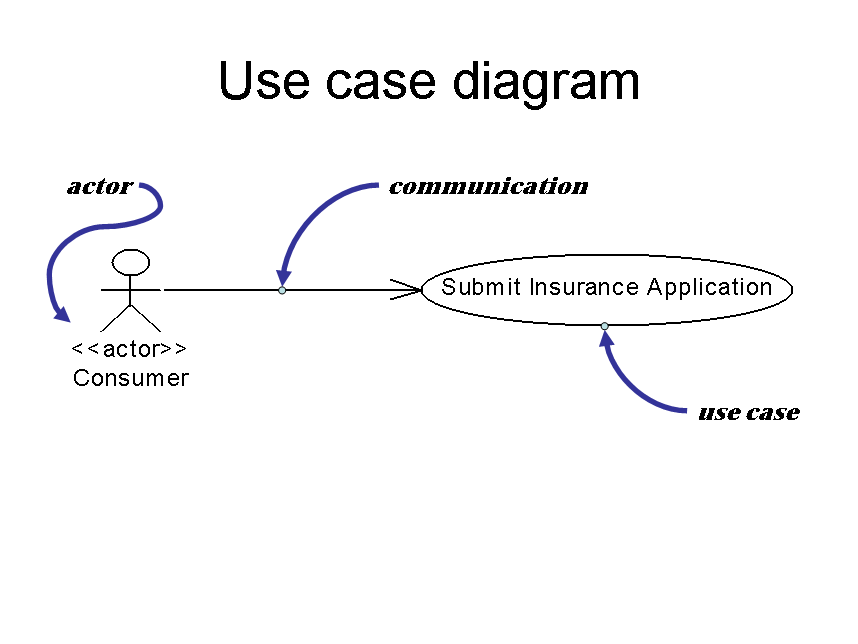 A use case is a system action performed on some object by someone or something (the actor) and includes communication between the actor and the use case, as shown in Figure 1. The use case implements one of the fundamental concepts of OO design: namely, that a message is sent to an object and then a method is invoked to act upon receipt of the message.

A use case diagram may incorporate many actors and many use cases, each uniquely drawn as illustrated above.

The class diagram, as shown in Figure 2, is the heart and soul of UML. When you reverse engineer existing Java or C++ code, most tools generate a class diagram; the syntax of class diagrams can be refined to a sufficient level to support code generation. 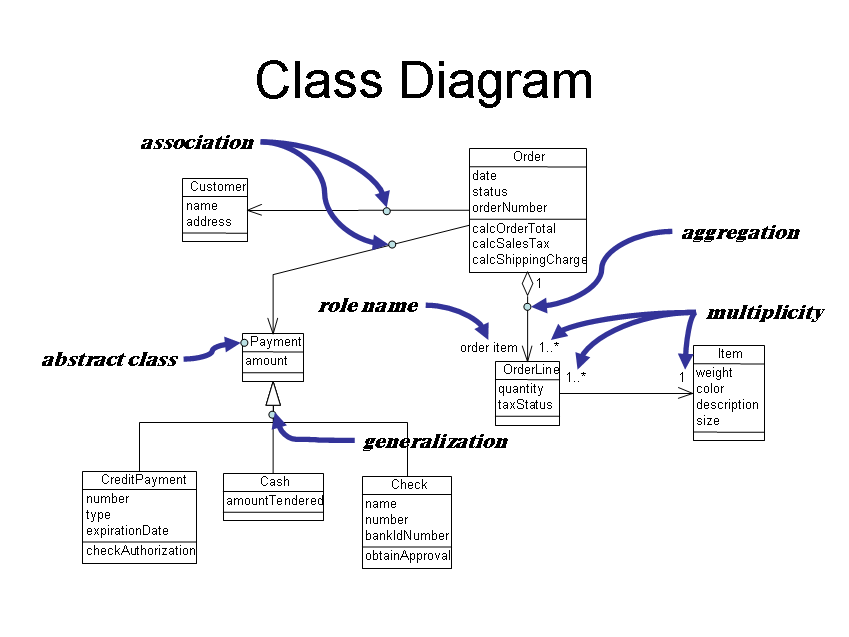 The class diagram depicts objects and the relationships that exist between objects. It's a modification of the old data modeling entity relational diagram (ERD) and is the only diagram backed by mathematics and science. The other diagrams in the UML are useful, but they are not mathematically sound or provable.

Some methodologies permit the extension of the class diagram to an object diagram (Figure 3), illustrating the relationship of instantiated objects. The object diagram is a good way to test the viability of your class diagrams. It should answer the question "Does my class diagram accurately represent my business objects?" 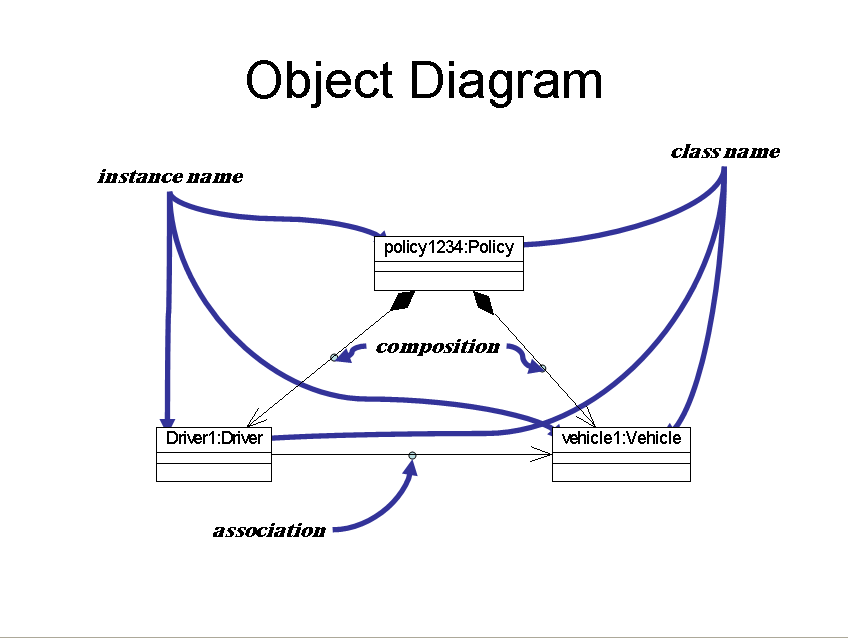 There are three basic relations in a class diagram:

Additional relations are defined in the UML:

When drawing class diagrams, be extremely careful to focus on the problem at hand and not on the details of the UML syntax. When you're looking at relationship types, roles, and multiplicity, numerous subtleties can cause disagreement and consume unnecessary time without contributing substantially to the design process.

Most tools also support package diagrams (another variant of the class diagram, shown in Figure 4), which are extremely useful for modeling your enterprise and the relationship between major components. A package contains classes. 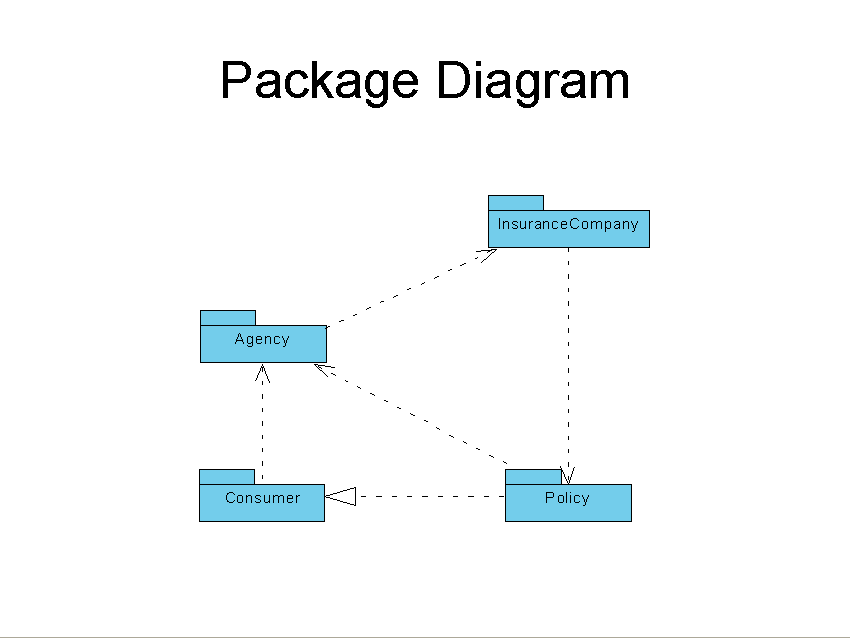 Thus far, we have discussed static diagrams that are designed to model your enterprise or a large component of your enterprise. Doug Rosenberg of ICONIX advocates creating lists of candidate objects within your enterprise, then modeling their relationships using a class diagram consisting exclusively of class names and simple relationships. He calls this process "domain modeling."

The remainder of the diagrams comprising UML are diagrams designed to analyze the flow, control, and activities of your system.

A sequence diagram illustrates the flow of messages through an OO system. In the example in Figure 5, a user enters an application for insurance on a Web page (the Web page is an object). A message is sent to the Agency system, which captures and stores the application and then requests a quotation from one or more insurance companies. The quotes are returned to the agency, which selects the best quote and returns the quote to the customer. 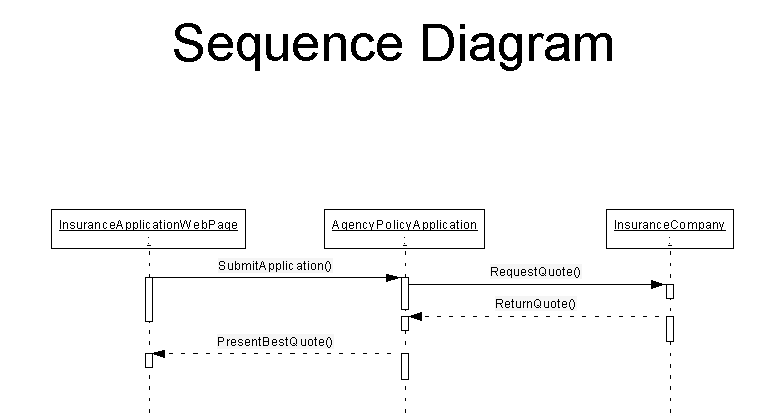 The collaboration diagram shown in Figure 6 is a variation of the sequence diagram. It is designed to show the collaboration between systems and components of a system on the same system or on a different computer system. The entity that is collaborating prefixes the name of the class involved in the system and is separated from the class name by a colon. 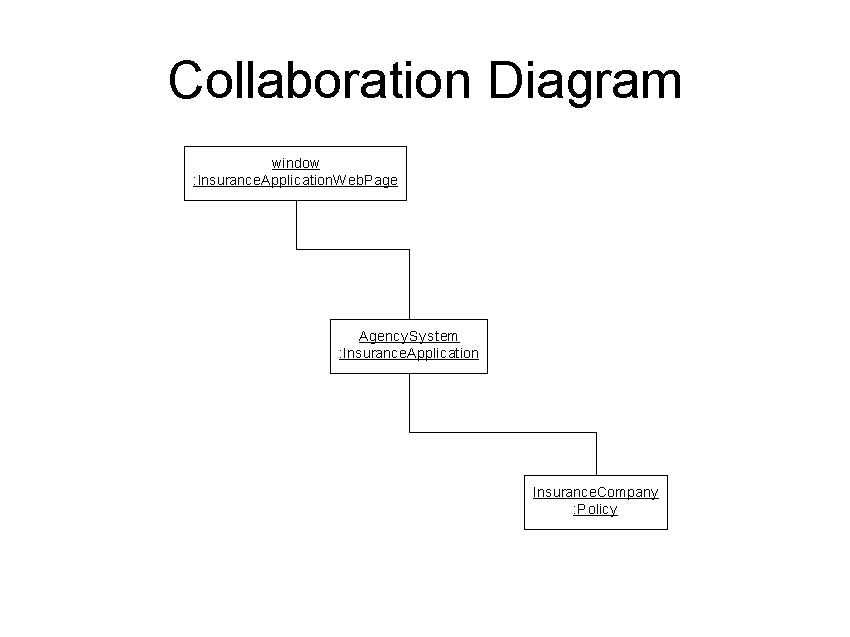 When your systems involve the changing of the state of one or more objects, the state chart diagram (Figure 7) can provide clarification of the process of setting and testing state as well as document the various outcomes when a device or object takes on each possible state.

This diagram evolved from software that controls machines, and the literature about it generally uses examples from mechanical device control to illustrate its use. However, this diagram can be used in business applications. Consider the example of an insurance policy: It may start out as an application and then change in state to an issued policy. Later it could expire, be renewed, be cancelled for non-payment, or be reinstated. Another example might be the states of an order as it moves through an order-processing system. 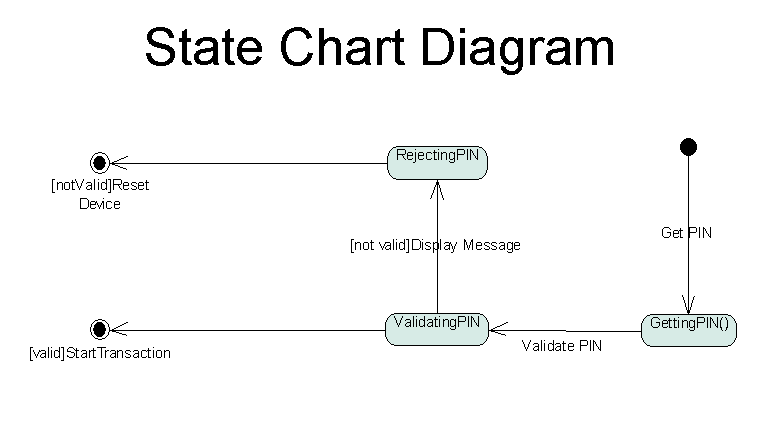 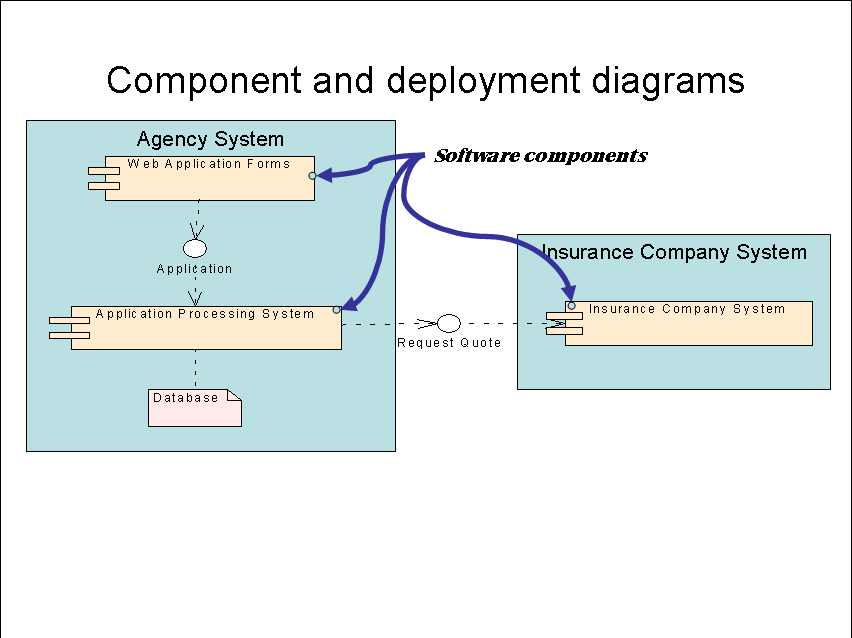 Although this article introduces some rudimentary concepts of UML as an OO design tool, it barely scratches the surface. Please review the Suggested Reading section at the end of this article for more information.

Another very inexpensive way to explore UML is via a product called Metamill, which retails at about $85 per user (much less when purchased in quantities of 10 or more).

Well-known tools such as those sold by Rational or Togethersoft retail for approximately $3,000 per user.

Last but not least, I strongly recommend TogetherSoft's "Practical UML: A Hands-On Introduction for Developers" tutorial.

Bob Cancilla is the author the popular new book from IBM Press, IBM eServer iSeries: Built for e-business. He also wrote Getting Down to e-business with AS/400, available from MC Press. Visit Bob's IGNITe/400 Web site.

Bob Cancilla is the IBM Rational System i Software evangelist helping to set strategy and adoption of IBM Rational application development and life cycle management software for System i customers. Bob joined IBM after over 30 years as an IT executive in the insurance industry. He was the founder of the System i eBusiness electronic user group www.ignite400.org, is the author of four books, and is an industry leader in the areas of application architecture, methodology, and large-scale integrated systems development.