Certainly by now, everyone has heard of Microsoft’s Active Server Pages (ASP). It seems that, even if you haven’t played with ASP yourself, someone else has been telling you how cool ASP is and how easily you can code dynamic Web pages by using it. ASP is cool, and it is easy to code with it. The problem is that ASP is primarily geared to Microsoft operating systems.

JavaServer Pages (JSPs) are the cross-platform alternative to ASP and are just as cool and just as easy to code with as ASP. The basic idea behind JSP is that, instead of having a file that contains only static HTML, a JSP file contains static HTML alongside code that dynamically constructs HTML from application data. Figure 1 (page 66) shows a sample JSP file that was used to build the List Customers Web page shown in Figure 2 (page 66). The static HTML is obvious; you can see the and tags at the top of Figure 1. It is also obvious that the Java code is nested between sets of <% and %> tags. Other than that, unless you’re familiar with both HTML and Java, the implementation and processing of the JSP example warrant explanation. That’s what this article does: It covers the basic structure of a JSP file and describes the behind-the-scenes processing that builds a dynamic Web page from the JSP file.

First of all, realize that, in a JSP file, the Java syntax is embedded in HTML. JSP files are, by convention, named with a suffix of .jsp. When I renamed the JSP400.jsp file shown in Figure 1 JSP400.html and requested it from my browser, my browser displayed the page shown in Figure 3. None too impressive, what happened was that, when I requested the
.html file, the server simply sent the whole file—including the embedded Java code—down to my browser. But, when I requested the JSP400.jsp file (as I did in Figure 2), the server parsed and executed the embedded Java code, which listed customer information contained in the QCUSTCDT file in the QIWS library.

Actually, that’s a lie or maybe just an oversimplification. What really happened when I requested JSP400.jsp was actually a little bit more complicated. When the server saw the .jsp suffix, it instigated what is known as the page compile process. The page compile process takes a JSP file and creates source for a Java servlet. That servlet’s Java code has static HTML code that comes from the JSP file along with the executable Java

logic. The server then compiles the Java servlet into a class and finally invokes the servlet class. In the case of the servlet generated from the JSP example shown in Figure 1, it opened a Java Database Connectivity (JDBC) object, retrieved a set of records, and then listed them using an HTML table. See the Editor’s Note at the end of this article for instructions on how to run this yourself.

Your first thought about the page compile process is probably “performance bottleneck,” but realize that, on subsequent JSP requests, the page compile does not take place unless the server senses that the JSP was modified since its associated servlet was last created/compiled. Also note that subsequent invocations use the same servlet instance. Through Java’s excellent and efficient implementation of threads, a single servlet instance can handle requests from many clients.

There are four basic types of JSP syntax as shown in Figure 4: directives, declarations, scriptlets, expressions, and comments. Actually, that’s five, but comments aren’t really code, are they? Anyway, I’ll describe each of them, and, if you know a little bit about Java, you’ll be able to understand the code in Figure 1. If you don’t know Java, hang on; I’ll describe the code for Figure 1 later in this article.

Directives, such as the first example in Figure 4 (page import), are identified by the “at” symbol (<%@). Directives are typically used to qualify the names of packages of Java classes you wish to use in your JSP. You can also use a directive to include output from HTML files, servlets, or other JSPs:

Declarations, such as the second example in Figure 4, are identified by the exclamation point (<%!). Declarations are used to describe object variables that can be used in any of the Java code within a JSP file. All the browser-based requests for that same JSP share the values of the declared object variables. JDBC and AS/400 Connection objects are good candidates to be defined in a JSP declaration.

Scriptlets, such as the third example in Figure 4, are identified without any special characters after the <% tag. Scriptlets are where you place your code. The code in a scriptlet can be as complex as you want; scriptlets enable the full power of the Java language within a JSP file. Notice that the example scriptlet in Figure 4 retrieves a JDBC Connection object and then starts a code block with an “if” condition. But then, curiously, the scriptlet is terminated by the %> tag. You’ll use this type of scriptlet all the time. You’ll use it because you’ll want to break out of Java to be able go back to HTML syntax to format output.

Expressions, as shown in the fourth example in Figure 4, are identified by the equal sign (<%=). Expressions are used to place the results of a single Java statement into HTML. The expression example in Figure 4 outputs the customer number value, which was retrieved from an SQL result set, to the dynamic HTML.

Comments, shown in the fifth example in Figure 4, are identified by a set of double hyphens (<%-- and --%>) when you don’t want the comment to be included in the dynamic HTML. When you do want your comment to be in the HTML that is downloaded to the browser, use the tags.

With the description of the basic JSP tags complete, I can now overview the logic in the JSP example shown in Figure 1. It begins with standard HTML: , ,

The next set of JSP code is a scriptlet. It begins by retrieving the Connection object from the getConnection method and then, with that connection, runs an SQL Select statement to get all the customers in the QCUSTCDT file. After the SQL result set is retrieved, the scriptlet abruptly ends so the JSP file can go back into HTML mode to define the beginning of an HTML table (a subfile in AS/400 terms). The tags indicate table headers.

With the table and its headers defined, the JSP starts another scriptlet, which is simply the beginning of a while loop. And then it’s back into HTML, where the table row () and table data () tags are used to format a single record from the SQL result set. Look closely at each line. Notice that each one contains a JSP expression. Each of those expressions is used to output the value of a data field from the SQL result set by basically using just the field name.

Another scriptlet, which contains a single curly brace, is used to close the while loop. This scriptlet is followed by the HTML end table () tag. The last scriptlet contains the closing operations for the result set and the JDBC statement as well as the catch clause that closes the try/catch block that was opened at the first scriptlet.

The JSP file is completed with the standard HTML tags that close the body and the HTML:

This example is just a simple introduction to JSP. But, even though it is simple, the code has already begun to get complex. While it is true that you can use JSP to include all the HTML and Java code required to implement sophisticated Web pages, I recommend that, once you are comfortable with JSP, you look into the Model-View-Controller (MVC) architecture for developing Web applications. The MVC architecture separates presentation from programming by using a combination of JSP and servlets. For more information on MVC, see my article “Application Modernization Nirvana” in the January 2000 issue of MC and Alex Garrison’s article “Servlets: The New Application Architecture” in the April 2000 issue of MC.

The examples in this article used syntax from the JSP 1.0 specification. I prefer the syntax of JSP 1.0 over JSP 0.91, and the JSP 0.91 syntax is quickly becoming obsolete. (WebSphere is one of the few platforms that still supports 0.91.) IBM’s WebSphere 3.0 supports JSP 1.0, but earlier versions support only JSP
0.91. I suggest that, if you can’t load WebSphere 3.0 on your AS/400, you work with JSP on your workstation using Sun’s free JavaServer Web Development Kit (JSWDK) from java.sun.com/ products/jsp/download.html. The JSWDK is known as a “reference implementation,” as it is used to test JSP technology. Visit www.midrangecomputing.com/mc and follow the Web tutorial in “A PC-based JavaServer Pages Tutorial: Using Sun’s JavaServer Web Development Kit (JSWDK) to Test JSP and Servlets.” That tutorial provides complete instructions for downloading Sun’s Web server reference implementation and IBM’s Java Toolbox for the AS/400 as well as installation instructions for the Web server and how to test the JSP example shown in this article.

out.print("Sorry. Database is not available."); 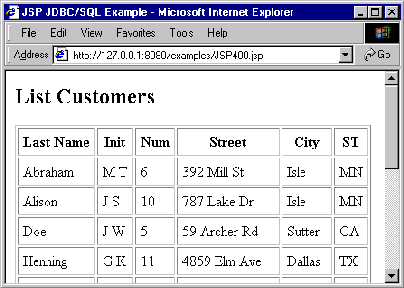 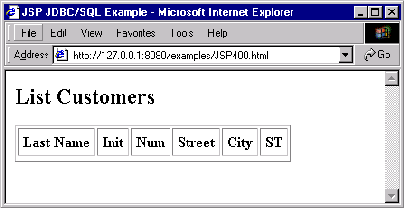 Figure 3: If you change the .jsp suffix of a JSP file to .html, the Java code is not executed on the host; it is sent to the browser, which ignores it.

Don Denoncourt is a freelance consultant. He can be reached at dondenoncourt@gmail.com.