Speaking and consulting engagements took Carol around the world—literally. Read about what she learned.

Recently, I had consulting engagements in both Singapore and Sydney, and then I was speaking at a conference in London. Rather than make three separate trips, I strung them all together and literally flew around the world in three weeks. All activities were IBM i–related, and I found some interesting differences in each location and some things that were the same, regardless of where I was. Let’s start with the differences.

I had a hard time adjusting to the later start to my day in Singapore. They typically start business between 9:00 and 9:30 and work until 6:00 or 6:30. I didn’t find a specific reason for that. I’m certain it’s cultural, but it was an adjustment, given that I usually start my day no later than 7:00 a.m. when I’m home in Seattle!

Getting around these cities was so easy compared to my mass-transportation-challenged home of Seattle. While car traffic is a problem in all three cities, there’s at least the option to use mass transit, which is not the case in many cities across the U.S.

While English is spoken in all three countries (duh!), every country had its own accent, and I had to adjust how I was listening to make sure I caught everyone’s words. That made me appreciate the struggle visitors to the U.S. have and was a reminder that I need to slow down and use “plain” English when doing webinars for our (HelpSystems) international locations.

While I used a credit card for major transactions, I used cash for meals and other minor purchases. Thus, I ended up carrying four stashes of currency: U.S. dollars, Singapore dollars, Australian dollars, and UK pounds. I loved and appreciated Singapore’s “plastic” bills, which I’m sure were developed to withstand the heat and humidity of that region!

I also ended up carrying three sets of power adaptors as all three countries use different electrical plugs. My fear as I packed was that I’d forget one and be that person searching through the travel stores at the airport in search of the right plug!

If I got homesick, I could always find a Starbucks or a McDonald’s. So, you say, isn’t that a similarity? Yes, but every country had at least one different thing on their menu. Like the cheddar and mushroom crescent at the Starbucks in London or the red rice porridge on the McDonald’s breakfast menu in Singapore.

Regardless of my location, every IBM i shop seems to be short-staffed. In the era of trying to move off the system, organizations didn’t hire or replace administrators who were let go during the recession, or retired, or switched to work for another organization. Now that those companies are finding that the system is staying around, they’re realizing that they need to hire and/or train more employees on IBM i.

Requirements to comply with various laws and regulations are universally on the rise. The exact law or regulation may be the same, such as the Payment Card Industry Data Security Standard (PCI DSS), but some are unique by country—for example, the Singapore Cybersecurity Bill. Notice, however, that I didn’t list the EU’s General Data Protection Regulation (GDPR) as a law that’s different by country. Many believe that it pertains only to companies operating in the EU, but that’s not true. For example, suppose a bed-and-breakfast in the U.S. hosts a couple from Germany. Although the German couple’s information doesn’t fall under GDPR while the couple is on holiday in the U.S., it is under GDPR requirements as soon as the couple flies home! I think many organizations outside of the EU are going to be surprised one day when they realize that they must be in compliance with GDPR.

Organizations continue to struggle with having sufficient knowledge of IBM i security to feel comfortable enough to implement its features and secure their data. That’s probably why my one-day IBM i Security workshop at the i-UG User Group was so well-attended. Attendees were eager to both learn the basics and hear about the more advanced features and recent updates.

Around the World and Back

While it was an exhausting trip, I met many interesting people and loved re-visiting some of my favorite countries and sights as well as catching up with colleagues in the UK. But one of the most refreshing highlights was seeing the renewed passion people feel about IBM i. Witness the IBM i 30th Anniversary celebration at the i-UG User Group Conference in Milton Keynes, UK. The centerpiece of the celebration took us back in time with a cake that was a replica of a B-series AS/400! 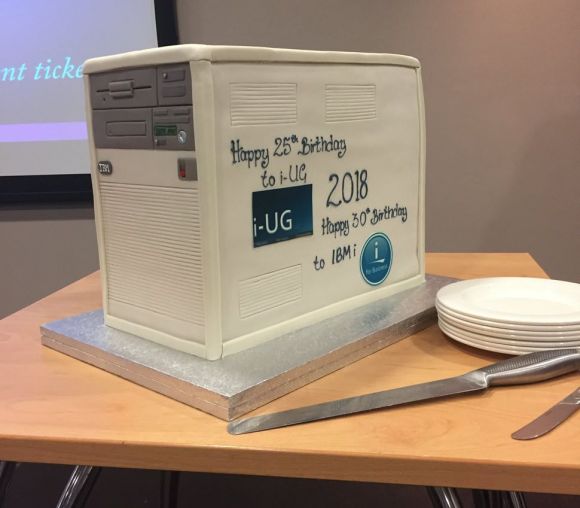 Fortunately, we’re no longer living in that era, and Steve Will’s keynote presentation at the conference highlighted how numerous companies are using today’s sleek, modern, and securable IBM i to update their technology, streamline their businesses, and stay ahead of their competition. Long live IBM i!