With Notes 9, IBM is leading the charge in how we use and manage email in a social world. 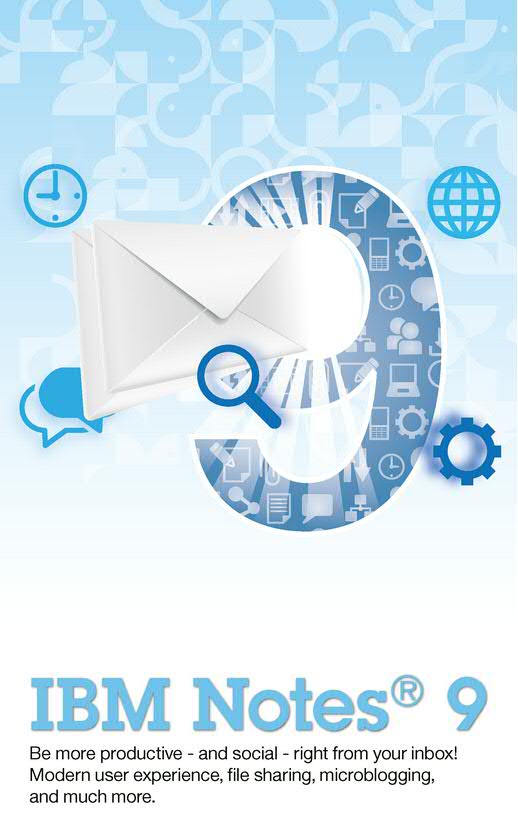 IBM Notes and Domino 9 Social Edition was released on March 21, 2013. While there are many features to cover on the IBM Domino 9 server, for the purpose of this article, I'll be focusing entirely on the very attractive Notes 9 client.

The first thing you'll notice about IBM Notes 9 Social Edition is that it's a complete overhaul of the familiar user interface (UI). Long gone is the familiar "yellow" look. From the desktop icons and splash screen to the main interface of the product, IBM Notes 9 has been given a solid bluewashing, adopting IBM's "social" theme with the consistent look and feel of other IBM Collaboration Solutions products, such as IBM Sametime and IBM Connections.

The interface is drastically cleaned up of clutter. While power users may view previous versions' amount of visible options and buttons as "feature rich," to a layperson it could have been a little overwhelming. As a power user, I was taken aback when I first launched the product. "Where did all my options go?!" I thought. They're all there but just not enabled by default. An example of new clarity: by default, Toolbars are visible only when a document is in edit mode. Not an extreme change by any means, but I tend to use the Collapse/Expand All toolbar buttons a lot, while most of my users probably don't. You can re-enable the feature for yourself by clicking View > Toolbars and unchecking Show Toolbars Only When Editing. 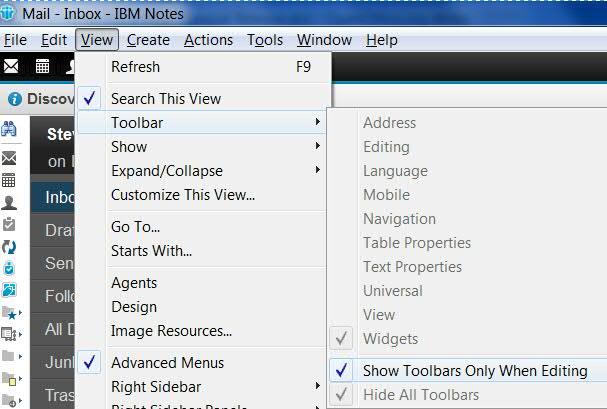 Figure 1: Re-enable your toolbars if you need them.

Most of the user feedback on the product I've received contained the words "clean," "sleek," and "attractive." Many people are used to the lack of visible features (or just plain features) in some offerings, such as Google's Gmail, so as much as Notes 9 is less cluttered-looking up front, it has plenty of features on the back-end for the gear heads like me to be productive.

Adding to the making of Notes to be much more user-friendly has been the addition of tool tips and a great Discover page. The tool tips are displayed when users hover the mouse over an interface item for a couple of seconds, prompting them with a little "Did you know?" dialog box. That's a handy feature; Notes has so many features that there isn't a week that goes by without a user telling me "I didn't know you could do that! Cool!" after I'd shared a little productivity tip with them.

Notes 9 also has a spot for shortcut buttons on the top left corner, making it easy for people to access their Mail, Calendar, Contacts, and more. Pairing that feature with an unchecked View > Dock the Open List really saves on some screen real estate for the user.

The Discover page is the first tab the user sees. It has a great "What's New" section highlighting useful features important to an everyday user in layman's terms, not techno-babble. This is so important. Users want to know about features but don't want to read the manual or the Help documentation, so IBM made it really easy for them. To boot, IBM also added very visible "Learn More" and "Watch It" links so users can get context-specific help and see a quick video demonstration with only one click.

Figure 3: Users are empowered by the Discover page.

My favorite feature of Notes 9 is the ability to find documents by typing. If I'm in mail and I want to find a message from a particular person, I just start typing the sender's name and Notes' Find utility gives me suggestions. If I'm looking by date, I can start typing a number and the Find utility's date picker pops up for me to choose the day.

Figure 4: This is Notes' Quick Find in action.

The Discover page also has sections for new users, highlighting some of the basics about Notes, such as how to use the right-hand sidebar and how to bookmark often-used applications.

Mail views now show simplified dates, displaying only the time received Today, and then as Yesterday, and finally as July 8, July 7, and so on. You can also group your mail by date, allowing you to expand or collapse mail from Today, Yesterday, Last Week, etc. And by default, mail is now always sorted by newest at the top. You don't have to set that preference manually or push it out via policy. IBM really listened to customers on this one. Customers requested for a long time that some of the preferences were set to a "preferred standard" out of the box. These little features make the Inbox simpler to the eye and easier to sort and find messages. Turn this on by clicking Show > Group by Date.

A great feature for filtering out what messages are important or not is the ability to preview the first 100 or so characters of a mail message in the inbox. You can turn this feature on by clicking More > Show Beginning of Message.

Figure 5: Turn on Group by Date and show Beginning of Message. 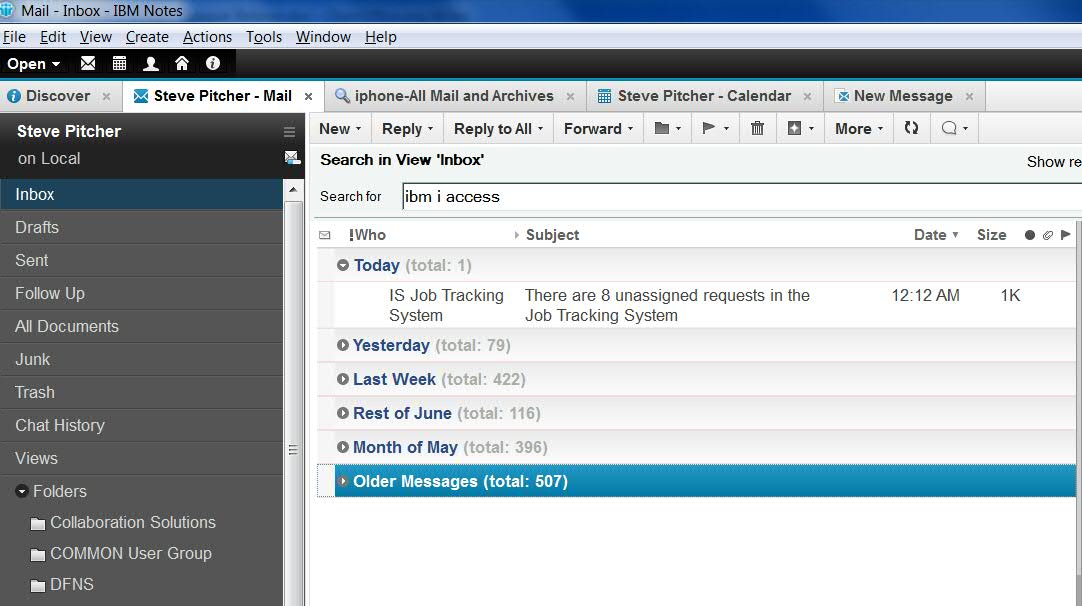 The Search field: Notes' most powerful feature got much more effective. I want to preface this by saying if you don't have a full-text index on your Notes applications, then don't complain about the search capabilities in Notes. It's 2013, and I still see Notes/Domino administrators who don't index mail files! They have no excuse and may as well put an "out of order" sticky note in the top right corner of a user's monitor to cover the Search field.

So what's the big new feature in the Search field? Answer: if you're searching your mail, it will also search your mail archives too. BAM! That's worth the upgrade right there. Just make sure you have the field set to Search All Mail and Archives in the drop-down box to the left of the field.

Let's talk about the mighty Notes Calendar a little. Two new things stand out for me as really awesome. First, you can color code your Calendar entries by category. Second, you can now scroll down your calendar without having to switch to a new month. It's a rolling calendar, so you can just page down week by week. Little additions like this make the product much more fluid and less clunky.

If you're using Sametime, the integrated Sametime client in the Notes 9 client is at 8.5.2 Interim Fix Release 1, which offers the same slick IBM "social" theme plus updated icons and a really fresh-looking appearance.

A really neat feature in Notes 9 is the browser plug-in. Have you ever written code for the Notes client and wanted to extend it to the Web but had a few issues in doing so? Perhaps you had to emulate a LotusScript function in JavaScript. Or maybe certain functions wouldn't work at all in the Web browser without a convoluted workaround. This plug-in will actually render your Notes applications in a Web browser, so you can interact with them the same way you interact with a Notes application inside the Notes client. This means no extra coding and no extra work. Mind you, it's not a replacement for XPages. If you're doing XPages, you probably have a good handle on development and can roll your own quite easily. For the people who aren't strong Web developers (like me when I did a bit of coding on a regular basis), this feature is perhaps the Holy Grail. You can install the browser plug-in either as part of or separately from your Notes installation. If you choose it as part of the Notes installation, you can't run both of them at the same time.

Let's talk about the "Social" in Social Edition, as there's plenty of new features here that are in line with IBM's vision for a social mail experience.

The concept of embedded applications may be new to you, so I'll explain. Imagine you have an application that processes employee expense claims and you're part of a workflow process. Notes 9 now supports the OpenSocial API, which means that this application can be embedded and integrated within your notifications (i.e., mail). When you receive an email notification of a workflow event needing your attention, you can now take action from within the email. Previously, you had to click a link to open the application in a completely different context, sacrificing time and really not having a fluid, seamless experience.

Another example: if you have a Connections email notification about a new blog entry, you can comment on that entry directly within the email itself. The blog entry comment on the Connections server and notification in your Inbox is updated with your comment on the fly. The Notes environment truly becomes alive and integrated with business processes. In order to enable this, you need to install the OpenSocial component on the Notes installer and you need to set up your Domino server (or ideally another server) with a feature called Shindig, which essentially facilitates the OpenSocial components.

Speaking of IBM Connections, the Notes 9 plug-in for Connections 4.5 was released a few weeks ago, allowing you to work with the Files and Activities components and update your status from a single context. You can drag a file from an email into Connections Files and vice versa. When you drag from Files, you actually drag a link to the file on the Connections server, saving mail server space when you send the email. If you want to send the actual file, you can copy/paste it from Files into an email instead of drag/drop.

The Brand, the Version, and the Road Map

The branding for the products formerly known as Lotus Notes and Lotus Domino are now IBM Notes and IBM Domino, respectively. The Lotus brand is essentially nonexistent from a marketing perspective. Some pundits whose content isn't worth linking to have used this name change to write misleading blog entries about the "death" or "demise" of Lotus Notes/Domino and pounced to prop up their own solutions as an alternative.

Here are the facts:

IBM Notes and its predecessor Lotus Notes is currently a solid #2 in enterprise mail market share, according to IDC. In 2012, Notes/Domino had 50,000 customers with 1530 reinstatements of support from customers who'd previously let it expire. The reinstatements show that the features and benefits of modern releases are less costly, less disruptive, and worth more to those businesses than migrating to another platform. These companies are renewing their commitment to IBM Notes/Domino because they see that IBM is committed to it.

Notes 9 is a full version release designed to, according to IBM's Ed Brill, former Director of Product Line Management for IBM Social Business software, "create buzz in the market, including awareness from the industry press and analysts who might not pay attention to a 'mod' point release; convey vendor confidence in the product and its value; indicate longevity of the product; and signal the delta in new features and capabilities." The stability of the 8.5.4 code stream is felt in the Notes 9 release as it was built upon the same solid underpinnings. I've beta tested the 8.5.4-9 code, and I've been running it in production for three months now. It's solid as a rock.

While Lotus Notes had 25 years of brand equity, IBM is the fourth most powerful brand in the world and the second most valuable brand in the world with 102 years of brand equity. Stamping Notes and Domino with the IBM branding and providing insight into the product's road map, stating support for the Notes 8.5 code stream out to 2016, does nothing but help solidify its future.