If you're on older iron, then the combination of POWER9 and IBM i 7.3 is your path forward. 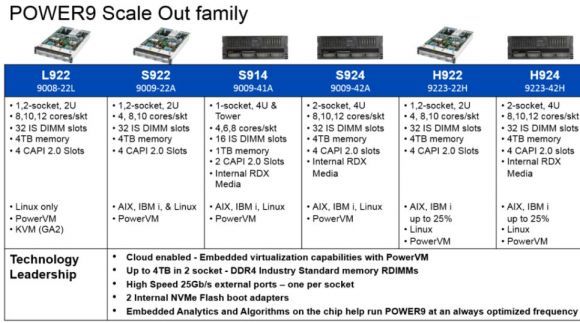 The word on the street for the last couple weeks is that these POWER9 servers will offer a 1.5X performance improvement over the POWER8 systems from a few years ago. On February 27, IBM released a performance benchmark report that was pretty much on the money. You can see the CPW increase on the POWER9 S9xx machines highlighted in bold below. Note that these numbers are based on machines that have been patched for the Spectre and Meltdown vulnerabilities. This is a great report by the way, if you want to understand how CPW is affected by patching those vulnerabilities. For instance, the S814 6 core machine was announced with a CPW rating of 59,500. After patching for Spectre and Meltdown, the CPW has dropped to 56,400 which is about a 5.21 percent performance hit. This seems pretty consistent across the board. 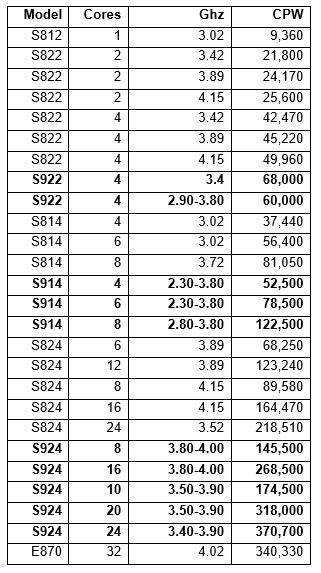 Sticking with the 6-core S814 and its natural migration path to a 6-core S914, you'll see that the CPW rating gives the S914 a little more than a 1.39 times more powerful performance improvement. The higher-end models like the S914 24-core model gives almost 1.7 times the horsepower of its S824 24-core counterpart. So it's roughly 1.5 times the CPW rating overall. You'll also notice that there's no follow-on product (as of yet) for the little S812. That's not unexpected, considering the S812 was late to the original POWER8 party, being announced just a little over a year ago.

IBM i updates get me excited because that's where the real value is to a business. Of course, faster throughput and bigger horsepower makes your jobs run more efficiently. "Go fast" is always important. But let's see what's new in 7.3 TR4 in order to see what's available for everyone.

The ability to store the source and compile a CL program from the Integrated File System (IFS) is long overdue considering that RPG got that capability years ago. This is important in order to help modernize our application development. Explaining physical file source members to someone shouldn't have to happen in 2018.

Speaking of development modernization, enhancements to the ARCAD RPG converter are always welcome. If we can get RPG code looking like modern code, I'd say that half the battle is won.

I would argue that Access Client Solutions (ACS) deserves its own article any time it has an update. It's powerful, slim, and easy. In the newest version, ACS has some new enhancements in the IFS to manage permissions.

Also, there's some cool stuff going on with Run SQL Scripts. I just updated mine to the latest version and had a look. I'm sure that the Abnormal IPL Predictor script below was not on my outdated copy of ACS as of this morning.

THEN 'NEXT IPL WILL BE NORMAL'

ELSE 'NEXT IPL WILL BE ABNORMAL - ABNORMAL END COUNT: ' concat abnormal_count

Either way, ACS needs to be in your arsenal if you're an IBM i administrator, developer, or database analyst. And it updates frequently.

Here are the updates of the IBM Announcement on 7.3 TR4 (copied directly from the announcement):

In addition, the SRCSTMF parameter has been added to the INCLUDE command so users can embed another source file stored in an IFS stream file.

Integrated Web Services now includes a number of key updates and enhancements to help both the developer and the system administrator.

Web service redeploy - The web service can be redeployed without requiring the service to be uninstalled first. This is a great improvement for the administrators when updating the services engine for updates to the service.

To get the updates, load the latest HTTP PTF Group.

The client transport support of the Integrated Web Services client has been enhanced to support the ability to retrieve the SOAP defined error fault specification from your RPG program.

When a client is using RPG stubs to invoke SOAP web services and a SOAP fault is returned by the server, there was no way to retrieve the SOAP fault data. If an error occurs in a web service, a fault message is returned to the client. The basic structure of the fault message is defined in the SOAP specifications. Each fault message can include XML that describes the specific error condition. These updates are included in the latest HTTP PTF Group. Details can be found in the Web Services Client for ILE Programming Guide and the Technology Updates web page, which may be found on the Integrated Web Services Product page.

For more details on this most recent enhancement, see the IBM Integrated Web Services for i Technology Updates page.

IBM i Access for Web - Mobile Solutions for i

IBM Access for Web (5770-XH2), the core for our mobile system access and management support, has been updated to now run on the latest versions of WebSphere Application Server V9.

IBM i is extending its recently introduced installation method that uses USB Removable Mass Storage technology, making the IBM i installation easier and more convenient. Additional devices are now supported. In addition to use of a USB Flash drive, RDX media is now also supported. Besides downloading to an IBM i partition or a Windows PC, the IBM i images from the Entitled Systems Support (ESS) website can be downloaded to a Mac for copying to a USB removable media. The IBM-provided USB utility program that is used to copy the Licensed Machine Code from the ESS website to a USB media has been enhanced with a GUI.

IBM i Access Client Solutions (ACS) continues along the path of becoming the IBM i tool of choice for administrators, programmers, and database engineers. This Technology Refresh includes many user-requested functions and features. These are listed below:

Updated support for the traditional Chinese CCSID 1371 has been added.

In the list of objects and folders, a new action 'Permissions' has been added for all the users to view the authority setting for each object or folder.

A new action 'View' has been added to the list of objects allowing the user to view the contents for selected objects within the IFS.

Within the SQL Performance Center, the sorting for Show Statements has been improved and enhanced.

Support for Properties, Start/End, and Swap Receivers has been added to the Journal section.

Within Visual Explain a new legend has been included to help the user better understand what is being viewed.

These and other ACS enhancements can easily be obtained from the Access family product web page.

Rational Development Studio for i

Rational Development Studio for i is providing enhancements to the key languages, extending developer capabilities and increasing productivity.

The RPG IV language continues to be enhanced with significant new functions.

Some sample parsers will be provided (for example, a JSON parser and a parser for a properties file). Users, ISVs, and business partners will be able to write their own data parser to include new data types they deem important. For more information about the features, see the RPG Cafe wiki page.

Backup, Recovery and Media Services for i

Backup, Recovery and Media Services for i (BRMS, 5770-BR1) 7.2 and later is enhanced with cloud remote system restore, which is the capability to restore virtual backup media from a cloud location to an alternate location on a system other than the originating system. Note that storing data in the cloud requires IBM Cloud Storage Solutions for i (5733-ICC). The BRMS PTF Group will be available March 16, 2018.

ARCAD Observer for IBM i

The ARCAD Observer for IBM i (5733-AO1) new level includes updates and fixes to help the IBM i development community navigate the world of modernization and development on IBM i. Some of the key updates include:

Multijob compile. The compile process is split into multiple jobs to improve the compile performance.

Support for RDi 9.6. This latest version of ARCAD Observer for IBM i takes advantage of the latest updates in Eclipse and requires the following versions:

Rational Developer for i: RPG and COBOL Tools 9.6, or later

Rational Developer for i: RPG and COBOL and Modernization Tools, JavaÃƒÆ’Ã†â€™Ãƒâ€šÃ‚Â¢ÃƒÆ’Ã‚Â¢ÃƒÂ¢Ã¢â‚¬Å¡Ã‚Â¬Ãƒâ€¦Ã‚Â¾ÃƒÆ’Ã¢â‚¬Å¡Ãƒâ€šÃ‚Â¢ Edition 9.6, or later

Identification of any truncation risks within code

Fixes for truncation risk, applied automatically or manually according to user choice

IBM Notes/Domino 9.0.1 Feature Pack 10 includes a number of fixes and enhancements. It upgrades Eclipse/OSGI to the 4.6.2 version for both Notes client and Domino server, upgrades the embedded SametimeÃƒÆ’Ã†â€™ÃƒÂ¢Ã¢â€šÂ¬Ã…Â¡ÃƒÆ’Ã¢â‚¬Å¡Ãƒâ€šÃ‚Â® to 9.0.1.x in the Notes client, upgrades Designer to JVM 1.8 compile time, and provides an add-on installer for CCM.

The IPL process has been simplified for companies not using a Hardware Management Console (HMC). This is specifically for Disaster Recovery and install IPLs (that is, D-mode IPLs) for servers with POWER9 technology. A DVD is no longer required to IPL to DST and then continue with another device. Instead, the load source for a D-mode IPL uses the integrated USB adapter in the POWER9 System Unit. You can use any of the integrated system USB ports and USB IPL hardware types (for example, DVD, RDX, USB Flash drive) for an entire install operation.