COMMON, Nashville, TN--April 15, 2002--IBM General Manager eServer, iSeries Buell Duncan gave an energetic and well-received speech to the members of COMMON--IBM's largest and most vocal user group--about the future of the iSeries. But now what?

Preaching to the converted is an old IBM custom at each semi-annual meeting of COMMON. But the issues facing this revitalized midrange community are not questions of customer loyalty: iSeries customers remain fiercely focused upon the iSeries server. Nor are they issues of iSeries technological ascendancy: IBM is expected to release new technology at the end of this month that will dwarf the power and scalability of all its competitors. (See "IBM to Unveil POWER4, OS/400 V5R2 Next Week?") No, the larger issue is "How can IBM grow the iSeries marketplace, so it can duplicate its success in the larger small and medium-sized business (SMB) mid-market?"

Buell Duncan's presentation was designed to answer that question. He pointed to a graph of average IT small and medium-sized company budgets and told us that for these SMBs--companies with 500 to 1,000 employees--the Total Cost of Ownership (TCO) was the most compelling reason for purchasing an iSeries. On average, these companies are spending the bulk of their IT dollars on internal staff. 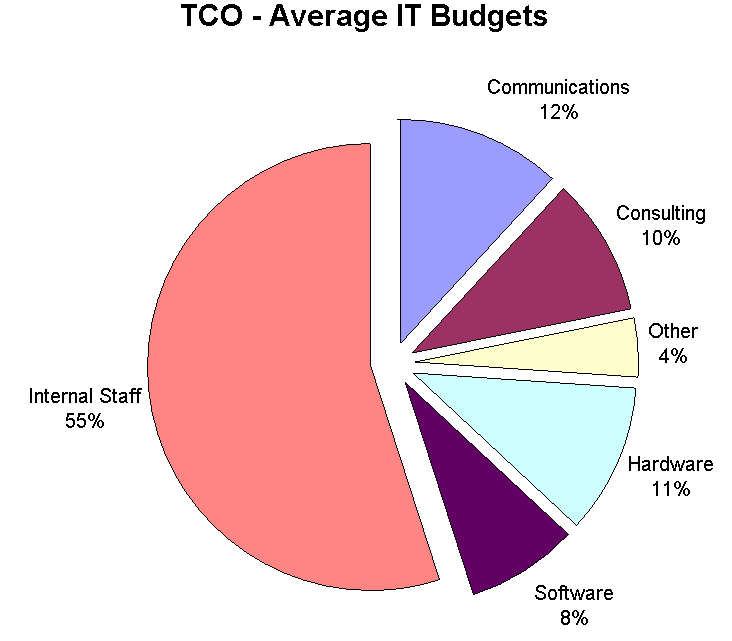 According to Duncan, this is a compelling reason for customers to consider what an iSeries can do for their company's bottom line: iSeries architecture can significantly reduce the personnel expenditures through iSeries integration and ease-of-use.

Why TCO Is a Hollow Argument to the SMB

But this TCO argument, in and of itself, is old news. So too is the ancient "ease-of-use" debate. And it convinces few new companies today to move to the iSeries. Why? This question is at the center of a midrange cultural debate.

First of all, many SMB customers have grown accustomed to the idea that they need lots of IT personnel if they are to be effective. One reason is that Windows customers have a different standard for ease-of-use, focusing on end-user interfaces and ignoring underlying IT scalability factors. Another is the fact that, as companies grow larger, they look for IT management from UNIX shops to lead them into the future, and UNIX managers seldom see the implications that an increased number of personnel can have on the overall efficiency and complexity of an IT installation.

UNIX managers tend to see their role as "professionalizing" the IT environment, and--in their minds--this means specializing personnel to particular technical tasks within the organization. In fact, the integration and consolidation features that hallmark the iSeries architecture may even be seen as threats by this IT management as they try to bring in the most specialized professional people they can find.

But it doesn't always help to have more people working on solution delivery. Sometimes it actually creates more complexity and confusion.

By comparison, the iSeries management traditional view of personnel runs counter to the UNIX experience. iSeries management tends to view the role of IT personnel as "Jack of all trades"--personnel who are first steeped in the business culture of the organization, but who also know how to transform that culture into an IT solution.

But those are just a couple pieces of the puzzle that Buell and his team face in expanding their market share. A larger and more significant puzzle is the industry view of iSeries itself.

Heart and Soul of the iSeries?

Today, any hardware engineer looking at the iSeries will tell you that the heart of the box is a 64-bit Power PC RISC architecture running on what is, essentially a pSeries chassis. Technologically, the shared hardware iSeries/pSeries lineage is a great engineering accomplishment: it allows the iSeries to automatically benefit from IBM's continued engineering investments in pSeries RISC technology.

On the face of it, OS/400 seems like an old operating system. It was originally developed out of the operating system that powered the IBM System/38 years ago. And this perception of OS/400 as "old technology" still worries many UNIX and Windows IT management. Furthermore, education on OS/400 is still difficult to find in most areas of the country even though IBM has many fine programs to move OS/400 into the curriculum of community colleges and universities; even COMMON has instituted scholarships to help new students obtain training. Nonetheless, the result for IT management is still the same: locating trained iSeries personnel is cumbersome compared to other IT disciplines.

What is needed on this front is a project to transform the perception of the industry. What is needed is a campaign to rebrand OS/400 as a new operating system that is no longer viewed as a legacy environment. IBM had a chance to do exactly this two years ago when the AS/400 was rebranded, but it failed to take the opportunity. Now rebranding is becoming increasingly important if iSeries is to reach new customers.

How Rebranding OS/400 Can Help

The only resemblance between the OS/400s of the 1990s and today's OS/400 is the name of the operating system. The OS/400 of today is not the OS/400 of three years ago: it is so much more. Consider that Version 5 Release 1 of OS/400 was the single largest release of software in the history of the platform. V5R2 is expected to be similar in size.

Consider that the major thrust of all combined releases over the past two years has been on the integration of other operating systems onto the iSeries platform: UNIX through PASE, Linux through LPAR, Windows through XIA/XIS. The hypervisor technology that runs the various LPARs on the iSeries is the most advanced operating system software in the industry, and IBM continues to support a statement of direction to bring UNIX directly into LPARs.

Version 5 of OS/400 is one of the most important initiatives in the SMB industry marketplace, yet its legacy name still presents an obstacle to its sale into most non-iSeries shops.

By comparison, rebranding OS/400 with a new name--on the heels of a new version release--would create some new excitement in the industry. It would cause companies who might be considering the technology of the iSeries to look twice at their strategies for server consolidation. It would remove the obstacle of the past branding of OS/400 as legacy, while reinvigorating the education market to provide new personnel.

Consider that Microsoft has rebranded its Windows operating systems five times and that the rise of Linux has transformed the debate of the open source movement that for years has surrounded the UNIX operating system. Rebranding OS/400--with appropriate enhancements in LPAR and the hypervisor--could, potentially, be a godsend to the struggling iSeries. Here is an operating system that runs everything: UNIX, Windows, Linux, and OS/400 legacy applications! How could such a rebranding but help the technological arguments that favor the iSeries platform?

Buell Duncan's enthusiasm for the future of the iSeries is a welcome change from the attitude of previous iSeries general managers. He is challenging the iSeries community with both new hardware technology and comprehensive changes in the underlying operating system. He is pushing for recognition that the iSeries is a "mainframe for the mid-market" and that it deserves the respect that its technology demands. His goals are worthy, and his accomplishments at marshaling IBM's resources have been extraordinary over the past two years.

However, until he and IBM marketing confront how the larger SMB market views this important IBM iSeries solution, he will continue to struggle with a legacy idea about this platform in the minds of his future potential customers. Rebranding OS/400 is a small price to pay that could reap huge benefits to both the iSeries community and the future of the platform itself. Without such a dramatic step, his arguments for the iSeries and his accomplishments with the platform will continue to fall upon deaf ears. Without such a step, the iSeries will remain a midrange solution that will falter in the larger SMB marketplace.