Remember when Total Cost of Ownership (TCO) was the knife that cut away the hype surrounding competing computing platforms? TCO as an analyst's tool was first pioneered by The Meta Group, and the TCO of a product represented the so-called "real cost" of implementing a new system. For years, the AS/400 (now the iSeries) was the darling of the TCO crowd, and the TCO argument was often used as the rationale for purchasing an initially more expensive system because the projected payback could be justified over a reasonable period of time.

On July 25, Meta released the most recent refrain of the TCO theme in a study entitled "The Impact of OS/Platform Selection on the Cost of ERP Implementation, Use, and Management." In this study, Meta contacted 12,000 United States firms in 2001 and received responses from 448. The findings--while not earth-shattering for the iSeries--reinforces the notion that the completely integrated architecture of the iSeries does make a significant difference in the total cost associated with Enterprise Resource Planning (ERP).

ERP as the TCO Barometer

In the past, ERP packages have been an excellent barometer for determining the overall costs of a computing system. ERP is a bundle of application modules that stretch into every corner of a company, requiring separate departments to coordinate financial and production information into a cohesive and comprehensive database.

The advent of the first true ERP systems in the early 1990s drove companies--particularly manufacturing companies--into a frenzy of new strategic software and hardware purchases. The AS/400 faired very well in those heady times, primarily because software companies like J.D. Edwards and others offered flexible and configurable packages that often defined the state of the art in ERP. Other non-AS/400 software vendors, such as SAP, soon worked their way into the AS/400 marketplace with versions specifically ported and tailored to run under OS/400.

However, by the end of the 1990s, the ERP marketplace was flooded with solutions, and most ERP vendors began aiming at the next logical segment of needs for their clientele: Customer Relationship Management (CRM) and Supply Chain Management (SCM).

For this study, Meta did a one-year and a three-year summary of costs associated with ERP, comparing HP-UX, IBM AIX, IBM OS/400, Microsoft Windows NT, Microsoft Windows 2000, and Sun Solaris environments. Some of the findings were quite revealing. 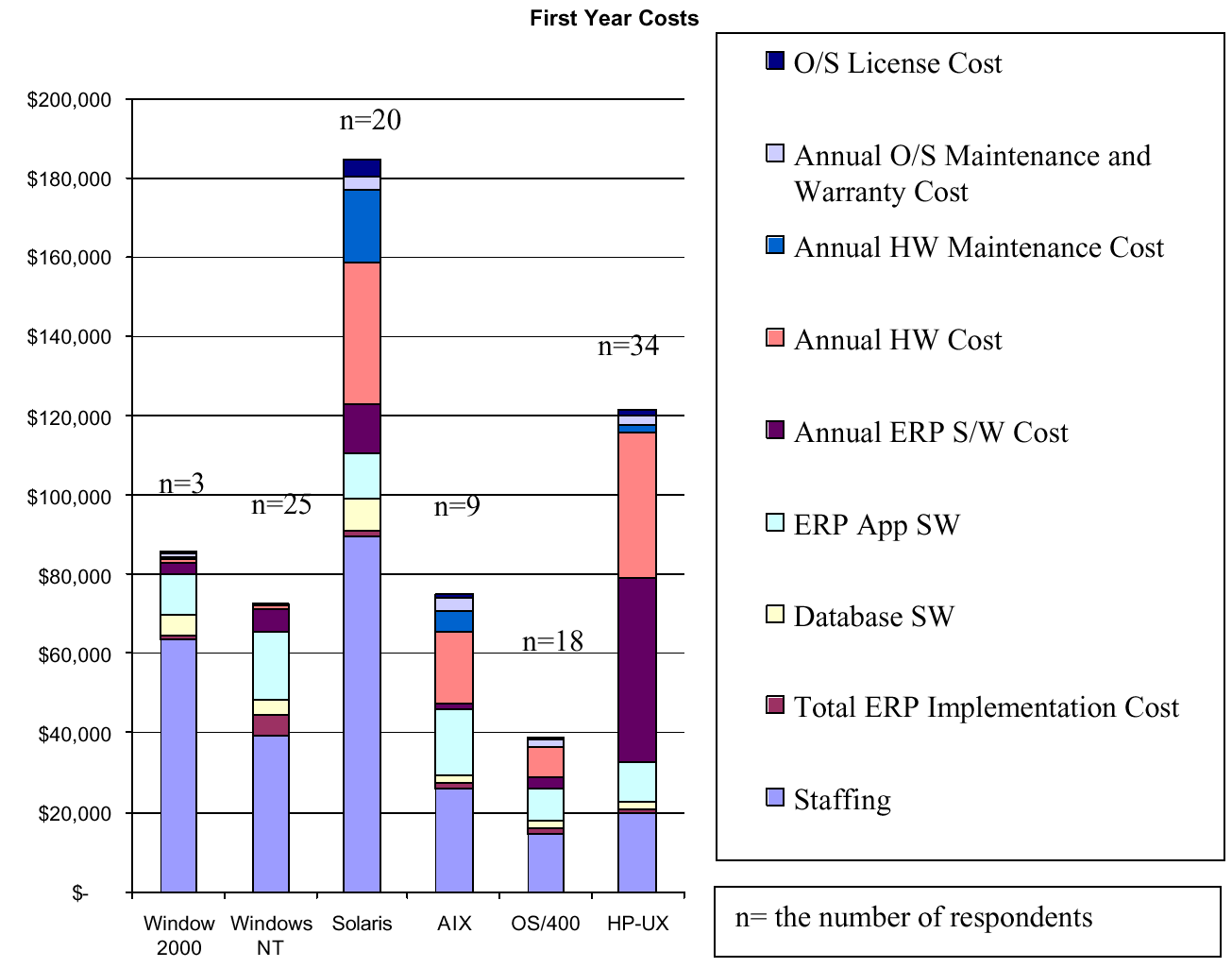 Source: The Meta Group: "The Impact of OS/Platform Selection on the Cost of ERP Implementation, Use, and Management"

The ERP application software costs themselves, however, favored the iSeries OS/400, being about half as expensive as any of the competing platforms. And while ERP implementation costs favored HP-UX, OS/400 kept its costs in line with Sun Solaris, AIX, and Windows 2000 (2 times higher), while Windows NT was six times as expensive to implement.

Of course, this Meta study is good news for the iSeries, but it's doubtful that it will seriously impact either the momentum or the sales of the platform. If only companies used TCO to choose their ERP computing platform!

Unfortunately for the iSeries, the opposite is true at most customer sites. Customers first choose their preferred ERP software package to meet their company needs. If the particular package doesn't run on the iSeries, the story ends there. However, even if the chosen package runs under OS/400, the opportunities to bring the iSeries forward into the sales cycle are few and far between for the sales representative. Why?

These days, CFOs and CEOs are not really interested in the hardware or the operating system that runs the ERP software. The TCO argument seldom even reaches their ears. On the other hand, IT departments and consultants--the principal advisors in the ERP server decision-making cycle--seldom think outside the boundaries of their own previous operating system experience. Consequently, a UNIX shop will become a UNIX ERP site; likewise, a Windows NT shop will only consider the challenges they will face implementing of ERP on that preferred platform. And--cost be damned!--a Sun Solaris shop will throw its preference behind Solaris even though it has proven to be--in some cases--93 times more expensive to run than the lowly OS/400 platform. Under such a stultifying atmosphere of prejudice, iSeries faces a tough challenge making inroads, even if IBM gave the platform away.

For its part, IBM once did a good job of promoting the AS/400 as the premier ERP computing platform--with incentives to IBM Business Partners and ERP vendors to bring the AS/400 forward in the sales cycle. This included incentives such as the Custom-Server packages that allowed vendors to pre-load their most common ERP configurations onto AS/400s at IBM Rochester. But unfortunately, the new IBM Business Partner structure today no longer adequately rewards the IBM sales representative for pushing an iSeries over an xSeries or pSeries ERP solution. Within IBM, marketing leverage for the iSeries General Manager and Marketing Manager for the brand is by all accounts quite limited. Though IBM claims it has no plans to abandon the iSeries platform or its loyal customer base, the current IT recession must certainly place an added burden on these individuals.

So, in the final analysis, though the TCO argument for the iSeries is still vital to the overall psychology of a company considering it for ERP implementation, it is no longer the argument that will sway an organization's selection criteria. In today's mid-market environment, the TCO for ERP becomes merely another bullet on a list of potentially significant advantages, hidden somewhere deep within IBM's Web site. The new potential iSeries customer seldom sees the TCO argument, scarcely understands it, and rarely considers it at all.