One of the most daunting obstacles facing iSeries and AS/400 administrators has been computer virus infection. This is not because the native iSeries itself is particularly susceptible to infection (it's not!). Rather, as a server hosting and delivering PC- and UNIX-derived files on its Integrated File System (IFS), the iSeries can harbor viral contaminants, worms, and Trojan horses that have been uploaded to the IFS by client machines. These viruses can be promulgated throughout the network among the client machines, creating serious damage while simultaneously leaving the organization open to liability damages from other companies with whom the iSeries network does commerce.

Still, some iSeries customers labor under the delusion that the iSeries is immune to viruses as long as they keep the IFS locked up. Unfortunately, this is no longer true, as the iSeries is based upon the same RISC technology as the pSeries, and as the differences between their underlying technologies grow smaller with each release. As OS/400 moves to embrace Linux and UNIX subsystems, it's opening itself to the same contaminants that impact those operating systems. So the belief that the iSeries today is immune to viruses is a myth: iSeries IT administrators must approach anti-virus security with the same focused attention as Windows NT/2K and UNIX administrators.

Unfortunately, until recently, an iSeries administrator had few tools to directly manage this kind of data infection.

One of the few options employed by many is to load up a PC with virus-scanning software and connect it to the iSeries. However, this solution is a severe security hole: In order to be effective, the scanning PC must be signed on to the iSeries with *AllOBJ authority and pointed to the root folder of the IFS. This leaves the iSeries vulnerable to hacking by others on the network.

Furthermore, an IFS-scanning PC is incredibly slow, tying up network bandwidth while simultaneously being subjected to technical interruptions.

The bottom line is simple: Though the iSeries object-oriented architecture itself is still relatively secure from viruses, its IFS--containing user PC data--is a natural viral incubator for real problems that can shut down the entire network. And the more IBM upgrades the iSeries to make use of the IFS, the more vulnerable it will become.

Now, Bytware has joined forces with Network Associates (of McAfee Security fame) to deliver the first and only native iSeries virus detection solution. Called StandGuard Anti-Virus, the product was engineered by Bytware and is powered by the McAfee Security technology.

The product does exactly what you expect an anti-virus suite to do, except that it does it on the iSeries platform much faster than its PC counterparts. According to Bytware, StandGuard Anti-Virus...

Upgradeable Based upon McAfee Anti-Virus Technology

Of course, new viruses are constantly appearing and spreading across the Internet on an almost daily basis, and Bytware estimates that there are over 60,000 viral contaminants moving about in the wild. So one of the key elements that StandGuard Anti-Virus or any other potential iSeries anti-virus software must provides is a means of upgrading the suite with new anti-virus technology as new virus threats occur.

Here, Bytware's partnership with Network Associates gives it a clear edge over other competitive products that may appear in the future and raises the bar for any vendor that chooses to enter into this market niche.

By leveraging the McAfee Security technology, Bytware has engineered its product to complement the McAfee Security solution to work across the entire IT infrastructure. As new viruses are discovered, this partnership will help Bytware deliver upgrades to its iSeries StandGuard Antivirus software faster. Customers will receive the latest anti-virus definition files directly from McAfee, providing an enterprise-level solution to virus alerts.

Combine that with Bytware's other substantial suites of iSeries security products, and IT can begin to feel comfortable about opening the IFS to much more use on the iSeries. 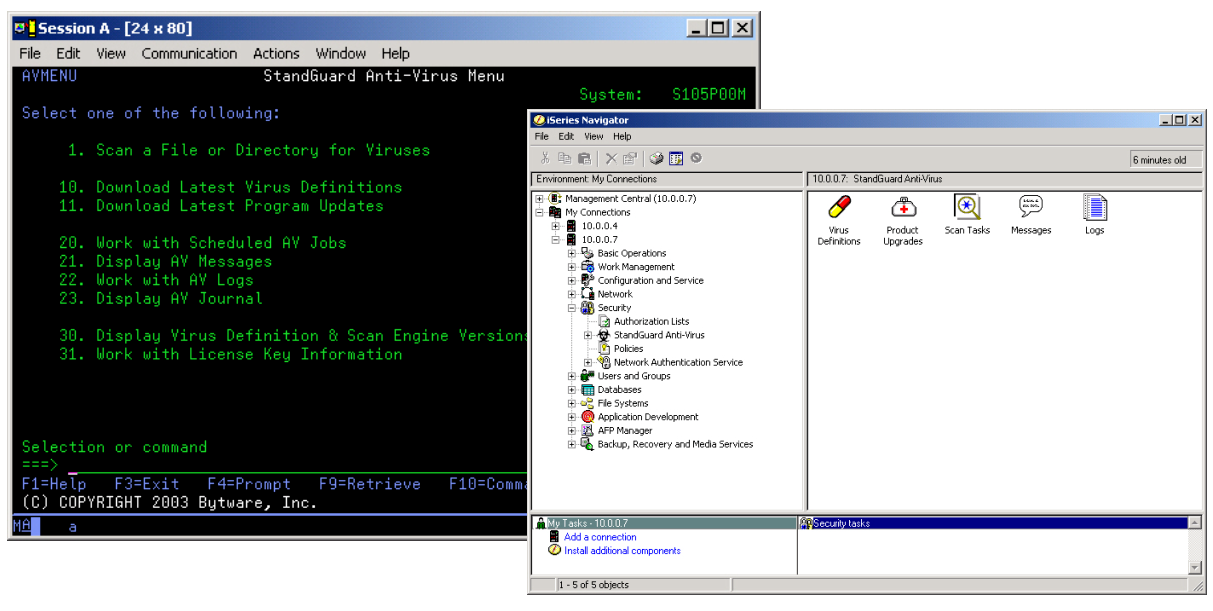 No doubt, there will be nay-sayers who continue to proclaim the invulnerability of the iSeries to virus attacks. "It's never happened before!" they'll proclaim. But like teenagers who believe they are supermen, the first real brush with a substantial virus infection will certainly make them blanch. And by then, it will be too late.

It's time for iSeries managers to overcome the myth of the iSeries Superman Syndrome, because IFS viruses can definitely be the Kryptonite that brings the network to its knees. Bytware's StandGuard Anti-Virus is an excellent new product choice to help maintain the iSeries' immunity while allowing iSeries administrators the opportunity to open the IFS to more functionality for the users.

Thomas M. Stockwell is Editor in Chief of MC Press, LP. He can be reached for comment at This email address is being protected from spambots. You need JavaScript enabled to view it..