Want to streamline your budgeting and financial analysis?

When your general ledger and transaction files are on your IBM i system and your budget data is in Excel, comparing the two can be a real challenge. Does your team have the right equipment to stay in championship form so you can streamline your budgeting and financial analysis?

Every organization needs to round the bases just to report on operations at many different levels. And, at some level, all companies need to track and report on their financial activities. You can hit a single by creating a simple view of your general ledger financial reporting, or you can knock one out of the park with a little work and creativity.

Often, companies spend considerable time and money implementing systems to manage the data that represents their enterprise activity. Many times, they find that the output options for the data from these systems strike out. For example, when your IT department, accounting department, or power users look at your accounts, they often find a fairly flexible number structure. But many financial packages don't have a simple way to categorize account numbers the way you need to view and use them.

You could use a Business Intelligence (BI) tool with flexible data access capabilities that won't overextend the IT department or your checkbook. A tool like SEQUEL lets you group your accounts to the level you need. Its dashboards summarize important business measurements on a PC or Web browser, empowering users to see the data they need when they need it.

So, let's start at the beginning of the game. Companies often use Microsoft Excel to create budgets and other documents for financial analysis. Meanwhile, their general ledger and transaction files are stored on a server, such as an IBM i server. The trick is to combine these two sources to create useful output.

Assume that you have a sample Consolidated Income Statement view (shown below) in SEQUEL. Think of this SEQUEL view as your designated hitter. 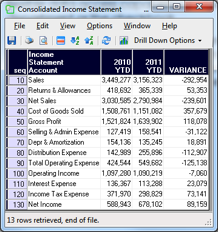 A few notes about this view: The first two columns, the sequence number (seq) and the Income Statement Account, are created from the data in the Excel file. In essence, this view groups numerous general ledger account numbers under a single category, such as Sales or Cost of Goods Sold. If you viewed the general ledger data without this grouping information, you'd see numerous account numbers. Here, they are consolidated into a single category and totaled.

Because this is a grouping view (in baseball parlance, a single), you use SEQUEL to drill into any row to see the "data behind the data." For example, imagine that you wanted to see more detail about the Cost of Goods Sold. You just right-click on the record and drill into the underlying department data (you just hit a double).

Figure 2: SEQUEL allows you to drill down into any row.

Need more detail? From there, SEQUEL lets you drill into a department to see the actual general ledger account numbers and amounts that make up that department total (a triple). 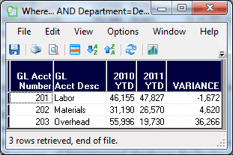 Figure 3: Drill down even further.

Here is a sample balance sheet view (with some formatting added to make the data stand out). 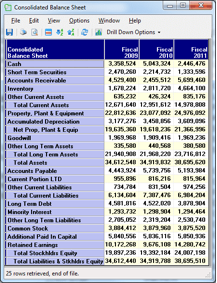 That's it! You're now grouping your transactional data in a format that you can easily use and share. The best part is that all of this happens dynamically without having to build data cubes, warehouses, or data paths. Now, that's a home run!

Use SEQUEL to analyze your financial data. It's easy to use, reliable, and hassle-free. Call us at 800-328-1000 and ask for a free 30?day trial. And check out Help/Systems' other offerings in the MC Showcase Buyer's Guide.

Mike Stegeman is Sr. Data Access Consultant for SEQUEL Software, a Help/Systems company. He can be reached at 847-273-1047, or at mike.stegeman@helpsystems.com.