Ghosts and witches—they’re kid stuff. But there really are other things to be afraid of.

This being October, Steve Pitcher has a bit of a Halloween scare for you. But this goblin isn’t a fantasy. It’s real. IBM has announced end of support for the exceptionally popular POWER7 machines. Will IBM offer extended hardware maintenance? Who knows? It hasn’t happened yet. Read Steve’s article to see his perceptions of what some may consider a truly horrifying announcement. 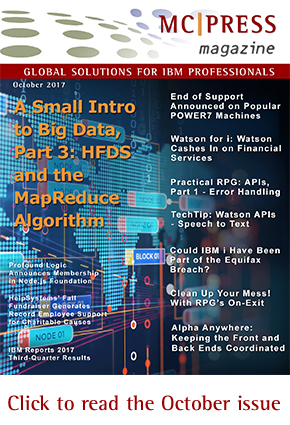 If news of the Equifax breach left you quivering with fear, you’re not alone. Many, many people are wondering if they were affected. More importantly, many more are wondering how such a thing could have happened. News sources reported that a database hack was conducted on a “legacy” environment. Hmmm…legacy. You’ve heard that word used to describe the IBM i. Could it have been an IBM i that was hacked? Maybe. Carol Woodbury comments on that possibility and discusses the multiple layers of defense that are available to IBM i sys admins to ensure security breaches don’t happen to their company.

But there’s more good news than bad news in this issue of MC Press Magazine.

IBM provides programmers with lots and lots of APIs, which you already know if you’ve ever browsed IBM’s extensive API library. Joe Pluta is a big fan of using APIs in his apps, so he’s going to introduce you to some of his favorites. To start the series, he’ll tell you about RPG’s error-handling API in his article.

Are you familiar with RPG’s On-Exit opcode? Brian May says it’s quite possibly his favorite new addition to RPG, and he laments that it seems that many RPG programmers don’t even know about the power and functionality it offers. What does the On-Exit opcode do? Read his article to find out.

Mobile app dev continues to be a top priority for many companies. This month, John Ghrist introduces you to Alpha Software’s Alpha Anywhere product. This product takes into consideration that the actions between the front-end of the app need to be carefully coordinated with those of the back-end server or cloud that supports it. Building the mobile app itself is really just half the battle.

Have you ever tried one of those “speech to text” apps? How’d that work out for you? Dave Shirey decided to look into a Watson API that (supposedly) performs that task. Let’s see what he has to say about the Watson Speech to Text API.

If you think the ever-changing maze of rules, laws, and regulations surrounding financial transactions applies only to banks and credit unions, you couldn’t be more wrong. Every organization has some level of fiduciary obligation. Keeping up is a big hassle, but it absolutely has to be done. Luckily, Watson’s software and cloud services can help you stay on target and out of trouble. John Ghrist explains.

Big Data is a big topic. That’s why Rafael Victoria-Pereira is writing a series of articles about it for you. All that data needs to be stored, accessed, and processed. In Rafael’s third installment, he reveals how Hadoop manages those huge tasks by using the Hadoop Distributed File System (HDFS) and the MapReduce algorithm. It’s a lot to wrap your head around, but Rafael’s analogies make it simpler.

This month’s issue of MC Press Magazine once again provides an array of useful articles to help programmers, sys admins, and CTOs make the most of their time and their companies’ money so that the daily grind delivers more treats than tricks.

Victoria Mack has been an editor and author for MC Press Online (formerly Midrange Computing) since 1994 and has held the position of Executive Editor since 2001. Victoria is also a freelance editor, author, and educator.