At the most basic level, an application is a computer program that has been designed to perform a group of coordinated operations to solve a particular problem. Consequently, all applications are constructed around five basic elements.

Editor's Note: This article is excerpted from chapter 6 of QuickStart Guide to Db2 Development with Python, by Roger Sanders.

Input is defined as the way an application receives the information it needs to produce solutions for the problems it has been designed to solve. Once the appropriate input is received, logic takes over and controls what information (data) should be placed in or taken out of memory and what arithmetic operations should be performed on that information. (Because data placed into or taken out of memory is not persistent and can be lost if not physically stored somewhere else, applications often interact with the operating system to move data to and from simple character or byte-oriented files.) Finally, when the application has generated a solution to the problem it was designed to solve, it provides output in the form of an answer or specific action.

Applications that work with Db2 still contain these basic elements; the only real difference is the way in which persistent data is stored and retrieved, and in some cases, the way logic is exercised. File input/output (I/O) operations are replaced with SQL operations, and in some cases, decision control can be built directly into a Db2 database in the form of a trigger, stored procedure, or constraint. But, because of this difference, Python applications that use a Db2 database for persistent storage must perform three distinct tasks that are not required by more traditional applications:

Additionally, Python applications that work with Db2 often perform other tasks like obtaining information about a specific database or retrieving Db2-specific error messages when a desired Db2 server or database operation fails.

In Chapter 4, “Python and Db2,” we saw that there are two Python libraries that are used primarily to build Python applications that interact with Db2 servers and databases: the ibm_db library and the ibm_db_dbi library.

And, in Chapter 3, “The Db2 Call Level Interface,” we learned that many of the APIs found in the ibm_db library are similar to those found in the Db2 CLI driver. Table 6.1 shows the APIs available with this library, along with their purpose.

Because the ibm_db_dbi library adheres to the PEP 249 — Python Database API Specification v2.0, it contains only one API: the ibm_db_ dbi.connect() API. Once executed, attributes and methods associated with the Connection object this API returns can be used to perform basic operations against the connected Db2 server or database.

Table 6.2 provides Information about the ibm_db_dbi.connect() API, along with a list of the object attributes and methods that are available with the ibm_db_dbi library. 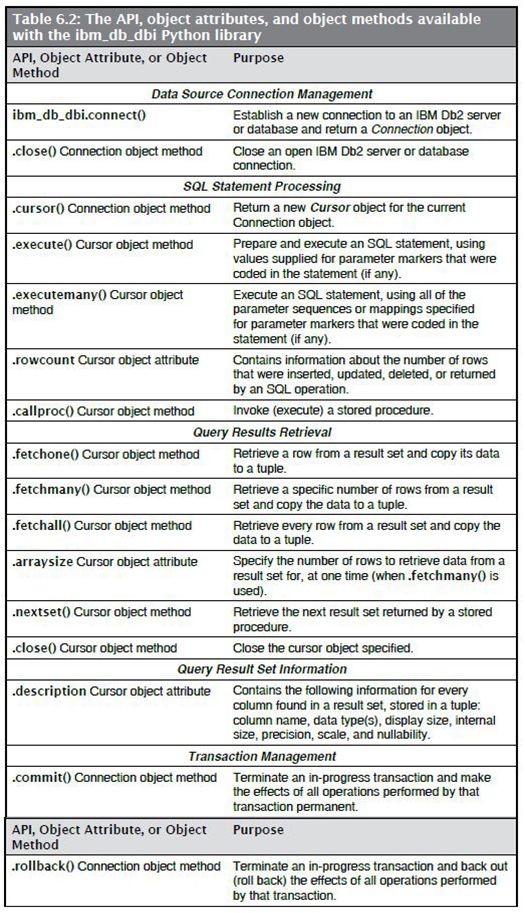 On the other hand, IBM_DBStatement and Cursor objects are used to store specific information about a single SQL statement (and its associated cursor, if any), such as:

Stay tuned for Part 2, coming soon in an upcoming issue of MC TNT. Can't wait?  You can pick up Roger Sander's book, QuickStart Guide to Db2 Development with Python, at the MC Press Bookstore Today!