In nearly every program you write, you need to control the flow of instructions. Free-format RPG IV offers experienced RPG programmers a new style for controlling program flow. In this chapter, we look at the numerous operations available for controlling flow in free format through conditional and selection logic, “do” functionality, and loop interrupts.

Four free-format operations—If, Else, Elseif, and Endif—help you construct programs that execute conditional logic in a structured way. Together, these operations form a powerful arsenal for managing the flow of instructions in your program.

Since IBM modified the If operation for the extended Factor 2 format, this operation has become a favored method for coding conditional logic. Rather than write the following:

it makes more sense to code

To use the If operation in free format, just take the extended Factor 2 expression and assume you have the freedom to put it anywhere in positions 8–80. For every If, you must also code a corresponding Endif. The generic End operation (used in fixed format) is not available.

The If operation performs exactly like its extended Factor 2, fixed-format counterpart. The compiler checks factors in the comparison expression according to the operators given and the dictates of precedence (order of checking). The order of checking is as follows:

If the premise expression of the If statement resolves to true, the operations that follow the statement are performed. The program continues with any number of operations until it reaches an Else, Elseif, or Endif statement.

Listing 6-1 shows an example of If precedence. 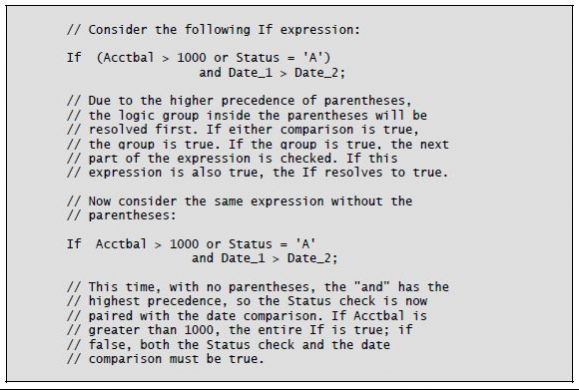 Listing 6-1: Precedence in If comparison expressions

Free-format’s greatest advantage for If (and other program-control operations) is the option to indent subordinate program logic. Indenting gives your program a pseudo-formatted look, entirely the same as in other contemporary languages, and it makes the flow of the program’s logic easier to discern. Listing 6-2 illustrates this method.

Just as with If, any number of operations can follow the Else. Indenting the operations specified after the Else gives future readers of your program a visual cue to the logic being used in the program.

The Elseif operation is a relative newcomer to RPG IV. It replaces the combination of Else followed immediately by another If operation. By using If with Elseif, you form a control structure that lets only one group of operations be performed. If the group includes no Else, it is possible that no group will be performed. By coding an Else operation at the end of the group, you create an option for the condition “none of the above.”

As I have noted, each If operation must conclude with an Endif. Free-format RPG IV provides no generic End operation like that in fixed format. The new approach makes your code “tighter” in the sense that only specified “end” operations work, reducing the chance of accidental error or misunderstanding by a future reader.

Listing 6-3 shows examples of If used with Elseif, Else, and Endif.

Listing 6-3: Using If, Elseif, Else, and Endif operations

More Articles By This Author
Input/Output Using Free Format, Part 2
To perform workstation input and output in free format, you use the same methods as in fixed format....
Input/Output Using Free Format, Part 1
Most input and output functions are the same in free-format RPG IV as in fixed format, except for th...
Introducing Free-Format RPG IV, Part 3
Programming Style Issues By Jim Martin Editor's Note: This article is excerpted from chapter 4 of ...
BLOG COMMENTS POWERED BY DISQUS