Editor's note: This article is excerpted from chapter 4 of SQL for IBM i: A Database Modernization Guide, by Rafael Victoria-Pereira.

Chapter 3 led us on the first step toward a true database, but it kept most of the hallmarks that make a DB2/400 database very "user-unfriendly": the table and column names are short, in the typical and old-fashioned way of the AS/400. However, end users' demands in regard to data queries have evolved significantly in recent years. The users of our UMADB are particularly data-hungry and are overtaxing the university's IT staff labor resources. This added burden on the IT staff is something that often occurs when you "open up" the database to the end users. The problem is that the database is not always ready to be used by someone not used to short, cryptic names, and this ends up causing additional stress on the IT staff, because it requires additional time and effort to "explain the database" to users and help them navigate the nearly indecipherable table and column names.

The next step is fixing that, by providing longer names that users can relate to. As you probably guessed, this will require changes to the tables' definition. Just as was explained in the previous chapter, this operation can be performed with a DROP TABLE/CREATE TABLE combination.

Let's help the university's IT staff and enhance the Grades table, but first, make sure you duplicate the UMADB_CHP3 library to a new UMADB_CHP4 library. This way you can always "go back" and repeat any of the statements mentioned in this chapter. Back in Chapter 3, all tables were changed to include a primary key and some auditing information. After these changes, PFGRM looks like Table 1.

Now we're going to make it a bit more usable for non-IT people. Time for some hands-on reading! When you're ready, type the following statement:

And issue the new CREATE TABLE statement, with longer names for the table and its columns:

You should get no results, because we've just created the table, but the statement shouldn't end in error. Notice, however, that the column names have changed: you now see longer, human-readable column names instead of the cryptic four-letter acronyms. The "magic"ÃƒÆ’Ã†â€™ÃƒÂ¢Ã¢â€šÂ¬Ã…Â¡ÃƒÆ’Ã¢â‚¬Å¡Ãƒâ€šÃ‚Â is being provided by the FOR COLUMN instruction on each column specification. The syntax is quite simple: instead of simply specifying the column name, as we did before, we're now saying something like "this SQL column has a system name of yyy," where the yyy is the cryptic four-letter name, and the SQL column name is the longer version.

Let's review an example to make this clearer. Look at the student name line:

Here you have the SQL name, STUDENT_NAME, followed by the FOR COLUMN instruction, which in turn is followed by what was already there on the table creation statement from Chapter 3: the "old" column name, GRSN, and the rest of the column definition.

As explained in the previous chapter, in the section that discussed creation of the view, it is possible to access the column using both the "old" and "new" names, which is great because programs can keep using the short names and people can now use the longer ones. Unfortunately, this doesn't apply (not yet, anyway) to the table name: the following statement will produce an error, complaining that the table doesn't exist:

Why is that? Well, it's because we created an SQL table with the columns of PFGRM, but it has a different name. For all intents and purposes, PFGRM doesn't exist in UMADB_CHP4 - yet. In order to keep all the programs that use PFGRM working and recognizing TBL_GRADES as the PFGRM that they "know," we'll need to create an alias, like this:

If the new table name was not a valid system name, this extra step wouldn't be necessary. In this particular case it is, because TBL_GRADES is 10 characters long and doesn't start with a "forbidden" character. After issuing this CREATE ALIAS statement, you should be able to run the SELECT statement using the "old" name of the grades table.

Let's repeat the process for PFSTM, the Students table, so that I can show you how to do the renaming, or more accurately, double naming, process in one step. The current Students table looks like Table 2. 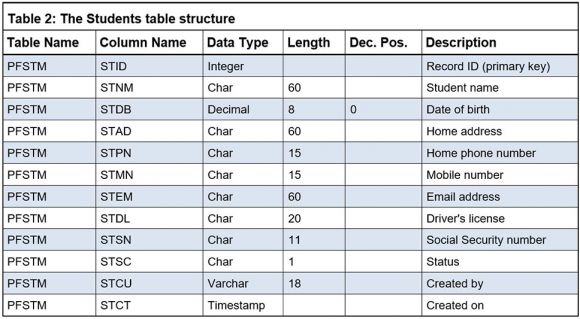 Again, we're going to use DROP TABLE to get rid of the existing PFSTM:

And then we'll issue a modified CREATE TABLE statement to create a table recognizable by its SQL and system names:

Here the long names are truly descriptive: SOCIAL_SEC_NBR is a bit abbreviated, but it's far more obvious than STSN. Note that I've added a FOR SYSTEM NAME PFSTM instruction (see the second line of the statement), which removes the need for a separate CREATE ALIAS statement. This is very practical, but not always possible: you can only do this if you use an SQL name that's not a valid system name, as I mentioned before.

This table is particularly interesting because it has some moderately long names that users might or might not want to use. I'm bringing this up to show you that you can refer to short and long names in the same statement; the database engine will figure out to which column you're referring to and show the appropriate data. Here's an example:

As you can see here, I'm using a mix of short and long names in this statement. This can be especially useful when the long names are too long or you're in a hurry to get things done. The RPG programs will still work as before, because they "see" the column system names, which are the same as the "old" DDS field names. You (and your end users) get the best of both worlds with this simple technique, but keep in mind that you need to back up the table's data before performing the DROP operation and restore it again (using an INSERT statement with a nested SELECT, for instance) once you've created the table with the appropriate table and column names.