It's time to continue our Big Data discussion. This article introduces the Hadoop framework, one of the most important and most commonly used tools in the Big Data world.

In the previous article, I explained that the most widely accepted definition (if we can call it that) of Big Data is more data than you can manage (store, analyze, and so on) with some (usually high) intrinsic potential value. I also mentioned that these datasets are usually composed of one or more types of data-structured (think RDMS), unstructured (typically text data stored in log files), and a mix of the previous two (like JSON, for instance).

The million-dollar question (well...sometimes it's worth even more than a million dollars) is how to "mine" the value hidden in the Big Data datasets. Just as in many other situations in which IT people found themselves with problems for which they had no tools, the Big Data conundrum (too much data with potential hidden value) led to the creation of quite a few solutions. Let's start with one of the most commonly used: the Hadoop framework.

What Does Hadoop Mean?

No, it's not Highly Available Data with Optimally Organized Processing - though it could be, because this made-up name kind of defines what Hadoop does. Actually, the name comes from the one of its creators' son's stuffed elephant. Strange as it may seem, this open-source software framework for storage and large-scale processing of datasets on clusters of commodity hardware (I'll explain exactly what this means in a minute) was named after Doug Cutting's 2-year-old son, who had just started to talk and called his inseparable stuffed animal "Hadoop," which he pronounced with the stress on the first syllable. This was the yellow elephant I was referring to in the first part of this article.

The Hadoop framework allows us to overcome the "too much data to handle" problem without resorting to expensive supercomputer hardware. Instead, Hadoop uses "commodity hardware" (read: old Pentium or alike PCs - a lot of them) to process the datasets, in distributed and parallel fashion. While a supercomputer typically processes data centrally and uses a high-speed network to feed the central processors and store the results, Hadoop breaks the data into smaller chunks that are distributed in a redundant manner among the components of its cluster, called nodes. These nodes (the old PCs mentioned earlier) running Hadoop-specialized modules (more on Hadoop's architecture later) handle all the processing locally and send back the results to the master node. This approach makes it possible to run applications on systems with thousands of commodity hardware nodes and to handle thousands of terabytes of data. Hadoop's distributed file system facilitates rapid data transfer rates among nodes and allows the system to continue to run smoothly even if a node fails. This approach also lowers the risk of catastrophic system failure and unexpected data loss, even if a significant number of nodes become inoperative. Consequently, Hadoop quickly emerged as one of the main tools for Big Data processing tasks, like scientific analytics, business and sales planning, and processing enormous volumes of sensor data, including from Internet of Things sensors. So, as you can see, Highly Available Data with Optimally Organized Processing kind of describes what Hadoop does. Now let's see how the Hadoop framework is organized, by analyzing its main components.

Hadoop started out as a side project of Doug Cutting and Mike Cafarella in 2005. It was originally developed to support distribution for the Nutch search engine project. It was fundamentally inspired by two Google engineers' research papers: Google File System (GFS) and MapReduce. Based on these papers, Doug and Mike created the core of Hadoop 1.0: the Hadoop Distributed File System (HDFS) and the MapReduce engine. A lot has happened since then. The huge community that supports the framework created tools that allow Hadoop to connect to the outside world (both figuratively and literally, with the ability to integrate Internet of Things sensor data), taking its functionality way beyond the original one. Figure 1 roughly depicts the current Hadoop ecosystem. 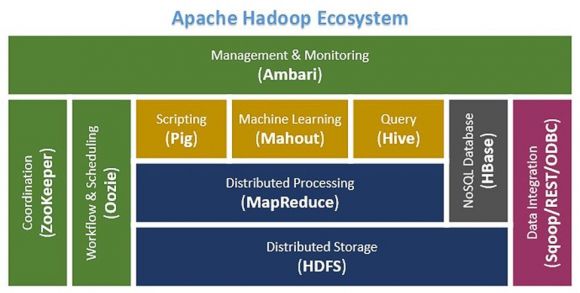 Let's review the components depicted here. Note that the list below doesn't follow a left-to-right or top-to-bottom order of Figure 1. Instead, it explains the components in order of importance and precedence. The list also includes a couple of components that are not shown in the ecosystem figure. Here's the breakdown of Figure 1:

Figure 2: Applications that run natively in Hadoop, thanks to YARN

There are many other tools built on top of (or integrating with) these, but the ones described here form the core of the ecosystem.

More About Hadoop Next Time

Next time around, I'll explain what a Hadoop Cluster is (I mentioned the term a few times but didn't explain what it means) and how MapReduce gobbles up entire datasets to produce useful insights.